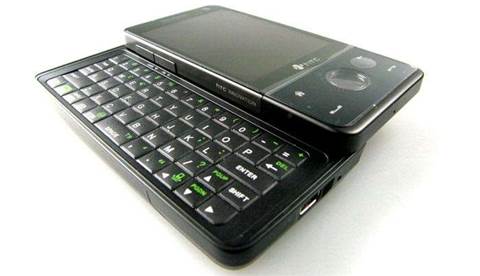 HTC's new Blackberry killer arrives on our desk, and it's every bit the showoff we thought it would be - and that's mean as a compliment.

We've been raving about Nokia's E71, and the Blackberry Bold of late. Now HTC has thrown a new heavyweight into the smartphone race - the HTC Touch Pro.

The HTC Touch Pro goes where other smartphones fear to tread, by combining about every feature under the sun, including both a touchscreen AND a slide-out QWERTY keyboard. If you were put off by the Touch Diamond's funky touch-only interface, this could be your ticket to a better Windows Mobile experience.

Why care?
I've been thinking about this myself, given that the Touch Pro is a lot chunkier (side on) than QWERTY phones like the Blackberry Bold and Nokia E71. But te Touch Pro is more of an all-rounder than these business-like devices. A bigger screen and mobile TV, a 3.5mm headphone jack [Correction: It looks like we jumped the gun here. In fact, there isn't a 3.5mm headphone jack, which is a letdown], and TV-out make it an enticing proposition for a work/play phone. At $1099, it's also cheaper outright than Nokia's music and TV phone, the N96, though it doesn't match the N96's 16GB of onboard memory.

Not too laggy
Much has been made of the extra onboard RAM, and on first impressions it does seem fairly responsive. Mind you, it still took 35 seconds to startup, though that's not unusual for heavy duty phones like this.

Keyboard gets the thumbs up, for the most part
The Touch Pro keyboard is a very different beast than those we've seen on the Nokia E71, and the Blackberry Bold. These buttons are larger, which is good, though they're flatter than those on the Bold and E71 - raised bumps would be easier to feel for with our fingers.

The keyboard is also slightly soft to the touch, rather than the hard plastic buttons on the Bold. Bigger numerical buttons on the physical keyboard would have been nice, for those that like to dial that way.

Chunky, not slimline
Forget the sleek lines of Nokia's E71 - we're talking about a chunky phone here, on par with other thick phones like Nokia's N96. Still, it'll fit on your pocket without any trouble, and it's not a porker width-wise, like the Bold.

TouchFlo
Much has been said about HTC's TouchFlo skin for the Windows Mobile operating system. There's no doubt it looks very, very slick. In practise, we were forced to switch to stylus just a bit too often for our liking, when for the most part we'd be happier to stick with our finger to select menu items. Still, most of TouchFlo is built for finger-touch, and it works well, and is relatively responsive, though not lightning quick.