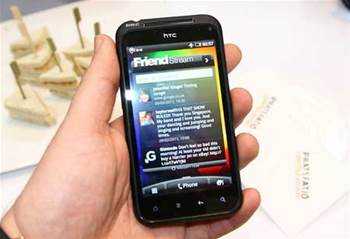 A quality all-round package - at least until the dual-core wave arrives.

HTC announced a whole swathe of new products last month and the first to surface is the firm’s new flagship Android phone.

The HTC Incredible S sports a large, beautifully crisp four-inch screen with a resolution of 480x800, an 8-megapixel camera with dual-LED flash, 1.1GB of built-in storage with 8GB supplied on a microSD card, plus the usual array of connectivity hardware, from A-GPS to 5.76Mbits/sec HSDPA and 802.11n Wi-Fi.

Despite announcing the Incredible S with Android 2.3, our review sample was running Android 2.2, with HTC Sense 3 running on top (an Android 2.3 update has been promised in a matter of weeks).

In terms of size, the HTC Incredible S sits somewhere between the 3.7-inch Desire and the 4.3-inch Desire HD, and it’s the ideal compromise. The four-inch screen offers better readability and makes using the onscreen keyboard easier than on the Desire, while avoiding the awkward bulk of its bigger HD sibling.

It’s crisp, clear and bright, too – easily the match of the Desire’s original OLED panel.

The HTC Incredible S's design strikes a good balance between looks and functionality.

The design won’t be for everyone (the matte-black rear panel features a raised panel some might call ugly), but the curved corners, narrow profile and rubbery casing combine to make this a comfortable phone to hold and slip in the pocket.

One further design point to note is that the Incredible S ditches the optical trackpad of the Desire and Desire Z. To compensate, the four glowing touch buttons below the screen perform the nifty trick of rotating whenever the screen does, so they’re always the right way up.

Another advantage the Incredible holds over the Desire HD is better battery life.

Our test involves an hour of audio playback through headphones, an hour of screen on idle time, a half-hour phone call and a 50MB podcast download, plus email checking via the phone’s default method throughout the day. The Incredible S had 50 percent remaining on the gauge after 24 hours of use, compared with a poor 30 percent for the Desire HD.

We were surprised to discover HTC isn’t matching upcoming rival phones by switching to a dual-core processor. Instead, it has employed a single-core 1GHz Scorpion CPU, based on the Qualcomm MSM8255 Snapdragon chipset, and couples this with 768MB of RAM and the Adreno 205 GPU.

It’s the same hardware platform as the Desire HD, and as such general responsiveness is great. Games played smoothly – we tested with Angry Birds and Asphalt 5 HD – the camera fired up without delay, and video playback via BBC iPlayer and YouTube over Wi-Fi was glitch-free too.

Results in various benchmarks back this up. The Incredible S loaded the BBC homepage in an average of seven seconds – not the quickest we’ve seen, but nippy enough, and on a par with the iPhone 4 running iOS 4.3.

It completed the SunSpider JavaScript benchmark in 5,779ms – again the equal of the iPhone 4 – and scored 1,517 points in the Android-only Quadrant benchmark. The latter score suggests it won’t be able to keep up the next wave of dual-core handsets, however, with the recently reviewed dual-core Tegra 2 ViewSonic ViewPad 10S scoring 2,302.

The 8-megapixel rear camera is the most capable we’ve come across on any HTC handset. It produced wonderfully clean, colourful shots (with a hefty dose of JPEG compression), and boasts a raft of useful features to boot. There’s touch autofocus, image stabilisation, you can adjust the ISO levels manually, and the dual LEDs work pretty well in poor lighting too. Video can be shot at 720p and look decent, although things do get a little muddy and murky in low light.

The Incredible S has the best camera on a HTC smartphone to date...

All-in-all we’re impressed with the HTC Incredible S. It offers the similar performance levels to the Desire HD, with better battery life, a better camera and a screen that is just as crisp and bright – and it does so in a more pocketable package. We can’t, however, shake the feeling that it’ll soon be surpassed by the forthcoming crowd of high-power, dual-core super phones. Once the Samsung Galaxy SII and LG Optimus 3D arrive, Incredible might not be such an apt name.

Note: the HTC Incredible S is not yet available in Australia. A factory unlocked model can be purchased from Mobicity for $649.

An impressive Android smartphone with good battery life and an 8MP camera.