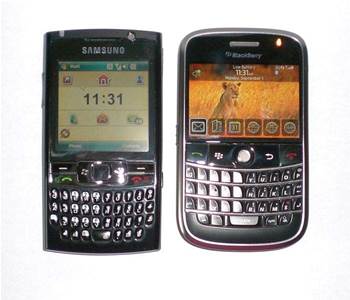 Not everyone is sold on Windows Mobile Professional, but if you're a fan, then Samsung's latest QWERTY phone is worth a look. We size up the Samsung i780 with Blackberry's Bold to see how they fair.

The smartphone stakes are high with new challengers constantly upping the ante on seasoned industry players in both the PDA and traditional handset market.

Although smartphones were originally conceived for business users on the run, new models continue to build on their ‘office’ features in a bid to widen their general appeal.

Samsung i780 is thinner and lighter, but not by much
In the shape and weight figures neither of these contenders are what you’d call svelte. The i780 is 16g lighter at 120g, and a few millimetres thinner and narrower, though the faux-metal rounded edges of the Bold do a marvellous job of disguising its extra bulk.

Samsung display not as good, but added height helps
Much has been made about the Bold’s new QVGA (480 x 320) display which is arguably the best looking colour TFT LCD on a handset device. The i780 has a unique 320 x 320 display which looks considerably duller in comparison, though we did found the added height useful for browsing websites and long list.

Blackberry's keypad easier to use
Blackberry’s signature Trackball offers a simple and intuitive way to navigate the Bold’s stylish revamped menus, though it isn’t nearly as flexible as we found the i780 running a tweaked front end of Windows Mobile 6.0 Professional with its touch-screen display and stylus plus an optical mouse pad that works like a charm.

Both smartphones have similar QWERTY keyboard layouts that feel awkwardly small at first, but it was the Bold’s larger, shaped keys that offered the superior tactile surface.

Better out of the box GPS with Samsung i780
Both deliver highly usable data speeds thanks to HSDPA support, which is on top of solid WiFi, Bluetooth 2.0, and GPS, however the Bold needs additional navigation software while the i780 ships with the comprehensive Route 66 Mobile. Annoyingly neither device comes with a windscreen mount as standard.

Blackberry seems to have better battery life
Battery life on both smartphones wasn’t record-breaking by a long shot, but as long as GPS, Wifi and Bluetooth activity was kept to a minimum the Bold saw out 4 days, while the i780 lasted almost 3 on a single charge. The i780 does however ship with a second battery.

Ultimately, with any device that’s going to spend half the day in your hands, it comes down to personal needs and taste, and more importantly how you choose to use them.