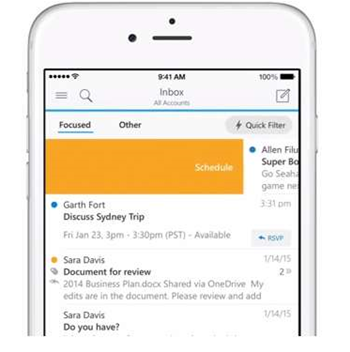 The company moved quickly after its acquisition of the Acompli email client for iOS in December last year, rebranding it Outlook, and keeping many of the features such as pre-sorting and cloud caching of messages for improved responsiveness and performance.

Unlike the other Office apps for iOS, Outlook doesn't have any premium features that require an Office 365 subscription.

Instead, it is fully-featured and as far as we can tell, free, with no licensing gotchas. It is only available for iOS 8 or newer, and on an iPhone 5, 6 or 6 Plus.

[Update: Microsoft has informed us that Outlook for iOS won't have any any premium features for Office 365 consumer or commercial customers at launch.

"We are iterating quickly to deliver these features to Outlook, shipping new versions of the app every few weeks."]

The user interface on Outlook 1.0.0 for iOS scales properly on the high-resolution displays of the iPhone and iPad it has been designed for, and aligns to horizontal as well as vertical positioning of the devices. 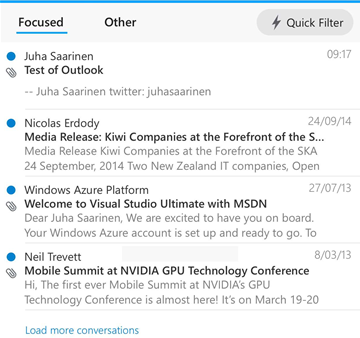 A key feature in Outlook for iOS is the Focused Inbox. This, Microsoft claims "intelligently pre-sorts your email so you can focus on what matters".

It does so by taking into account messages and people that you interact with, while filtering out noisy sources like auto-generated or bulk emails.

On a small screen, having an intelligent sorting algorithm for your inbox is great; in our short testing of Outlook for iOS, the customisable inbox worked well. 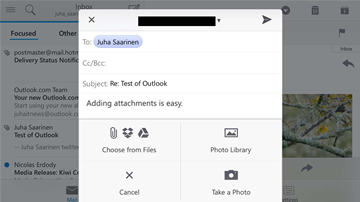 One feature that will have iOS Mail.app users weeping with joy is Outlook's easy attachment handling, something that Apple to this day refuses to do right.

What's more, Outlook supports third-party cloud storage providers like Google Drive, Dropbox, Box as well as its own OneDrive, so you're not bound by your phone's meagre capacity.

Message handling is nicely done, with customisable left and right swipe actions; if you want to delete messages instead of archiving them, that's easily changed. 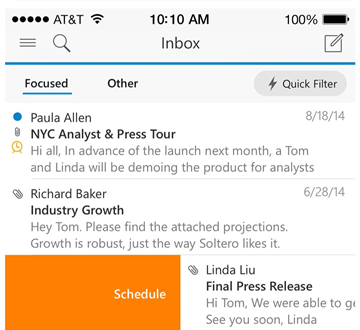 The default Schedule right-swipe on Outlook lets you time messages for when you want to deal with them, a very useful feature if your inbox is constantly flooded. 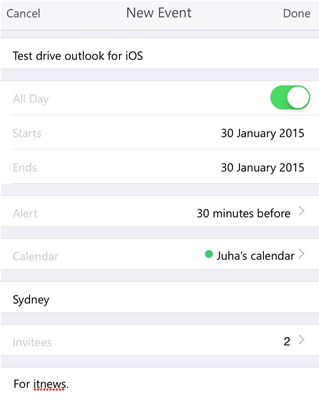 The Calendaring feature has also been well thought out. You can add, remove and view multiple calendars, as well as add and share appointments with ease. There's a combined daily/weekly view, and you can access a monthly view by pulling down a bar.

Outlook supports several email, calendaring and contacts services like Google and Yahoo, but what's wrong with the below picture? 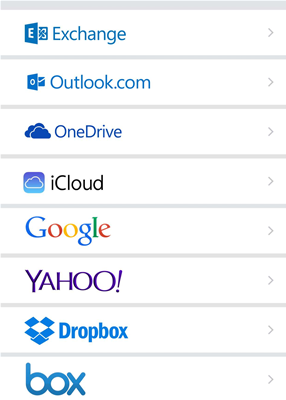 Tthere's no way to manually configure your organisation's own mail servers.

According to Microsoft, there are no plans to add support for IMAP, or (we assume) POP3 message retrieval servers and SMTP mail exchangers. [Update: read below].

That's a real clanger for many enterprises who prefer to operate their own services, and a less than subtle way to push them towards running them on Azure.

Another concern is that Microsoft has not detailed whether Outlook supports encryption and connection verification through Secure Sockets Layer (SSL) or by other means.

We've asked Microsoft about this, but there is no option in Outlook to enable SSL currently, unlike the built-in iOS Mail.app.

Digital signatures didn't make it into this version of the email program, and a spam filtering/flagging feature on the Outlook client would have been nice, similar to what Google provides for Gmail.

Close but no cigar

Outlook for iOS is actually rather nice, and one of the better mail, calendaring and contacts apps out there.

If your organisation runs Exchange, uses Outlook.com or another of the supported providers services, Outlook for iOS is worth a look - provided Microsoft confirms that it uses encryption.

If not, that and the lack of support for other mail servers probably means you're better off with another client, until Microsoft sees sense and adds the missing features.

Update: Contrary to what the support documentation in Outlook for iOS says, Microsoft told iTnews that IMAP and POP3 support is in the works and will arrive at an unspecified date.

There is also transport security, we’re told, even though the exact details of this weren’t revealed.

While it’s a good that Outlook uses encryption to send and receive emails, users on the Office blog voiced concerns from a security point of view that the app continues to use Acompli’s existing architecture.

This means mail, contacts and calendar appointments are cached in the cloud, on Acompli’s servers, along with users’ Exchange and Active Directory credentials. Microsoft has confirmed that Outlook for iOS will use  this type of architecture for the time being, which may or may not fit in with some organisations’ policies.

Microsoft Outlook is arguably one of the best email and calendaring clients for Apple iPhone and iPad customers - especially for enterprise users - in terms of usability. But it's a shame that there are also some big misses, like the lack of support for IMAP and alternative SMTP mail servers.