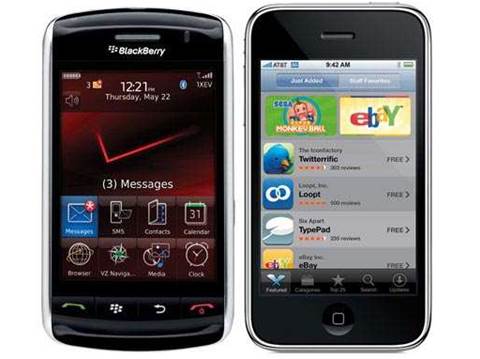 It's a bit of a shock coming face to face with a Blackberry with no keyboard at all, and even with only a bit of exposure to the Storm, we're still finding it a bit tougher than we'd expect to type and tap accurately.

It's not quite as excruciating as HTC's sluggish Touch Diamond, but it's definitely going to be an acquired taste, as is the tappable screen, which operates for all intents and purposes just like the single-tap-button pad on the new Macbook and Macbook Pro lines.

RIM has at least gone for nice large icons, so you're not delicately trying to select too small an area with each tap.

So how does the Storm compare to the iPhone 3G? Both have large touchscreens, the Storm is slightly heavier at 155g vs 133g for the iPhone, both have GPS, while the Storm boasts a 3.2MP camera vs 2MP for the iPhone.

One major difference is the lack of WiFi on the Storm - possibly a big deal if you rely on your office/home wireless. Another big question will be whether Blackberry can match Apple's App Store.