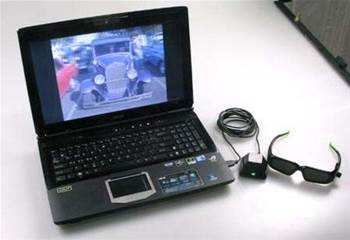 2010 is already dominated by 3D. Soon stereoscopic 3D glasses will be coming to the laptop space thanks to ASUS and its monstrous G51JX 3D laptop.

Over the holiday weekend Clash of the Titans proved that the novelty of 3D easily triumphs over horrible reviews. Since Avatar opened the 3D floodgates we have seen more and more announcements of movies going 3D, and this year's CES show was dominated by screens designed to bring that 3D experience into the home.

3D without the nausea
Stereoscopic 3D is by no means a new technology. What makes it different in 2010 is that we finally have hardware that is capable of displaying it without making the viewer nauseous. PC graphics company NVIDIA has been pushing a 3D gaming solution on high end desktop systems for some time now, and we are finally seeing it trickle down into the notebook space (albeit the incredibly expensive end of it).

The laptop approach
ASUS is soon to bring its G51JX 3D 'Republic of Gamers' laptop to Australia. While the production model is not quite ready yet, we have had a pre-release version in the labs for a look at what is in store.

Big and bulky: enter the ASUS G51JX 3D
Designed for serious gamers, this is by no means a thin and light model. It has a bulk befitting its power and is designed around a 15.6in backlit LED screen that is capable of the 120Hz refresh rate needed for stereoscopic 3D to run smoothly.

Under the hood of the model in the labs sits an Intel Core i7-720QM CPU, 4GB of DDR3, dual 500GB hard drives and a Blu-Ray DVD combo drive. This model uses an NVIDIA GeForce GTX 260M graphics processor, but the model that will ship here will sport a newer GeForce GTS 360M chip.

3D is enabled with a set of NVIDIA 3D Vision glasses. These use an LCD shutter technique to create a 3D effect, and require an infra red receiver to be plugged in via USB to work. This doesn't make for the most portable of solutions, but again, this isn't a notebook designed to be used on the go.

Beyond gaming
Games are a natural match for this technology due to the way 3D graphics engines are built (it means that very little has to be done to get stereoscopic 3D working). But the G51JX 3D is designed with more than just gaming in mind. The Blu-Ray drive is ready and waiting for 3D content to start appearing later this year (the 4x speed helps here), and there are cameras on the horizon designed to take 3D photographs that will need stereoscopic glasses to view.

We are expecting to see the G51JX 3D hit the market over the coming months. It is an amazing piece of technology, and will come with the price tag to match - a cool $2999.