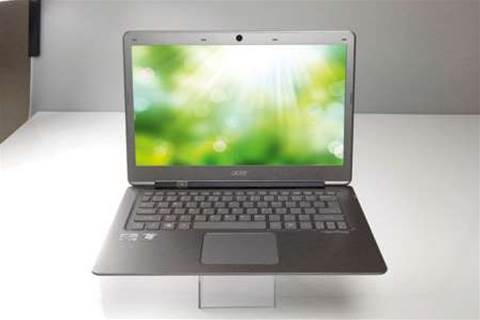 Ultra-thin and light computing for a reasonable price.

We have heard a massive amount of hype about Ultrabooks since ASUS’ launch at Computex this year. But Acer has the distinction of being the first company to actually put a production model of its S3 Ultrabook in our hands, and what a beauty it is.

Weighing only 1.37kg and measuring a mere 17mm at its thickest point, Acer has chosen to go with a magnesium alloy-based chassis. It isn’t a unibody design, but that doesn’t detract from the slightly curved lines of the underside of the chassis.

In order to build it this way, Acer has put most of the ports on the back of the S3, under the hinge. As this is the thickest point of the chassis, it means that it is the best place to fit things like HDMI and USB.

All that remains on the side is a headphone jack on the left and SD card reader on the right. On the rear are two USB 2 ports and the aforementioned full size HDMI port. There is no Ethernet, rather communication is via both WiFi and Bluetooth.

The Acer S3 measures 17mm at its thickest point.

While we can excuse the low number of ports, the one massive source of disappointment with the S3 is the lack of USB 3. Despite what you may read elsewhere, USB 3 has been shipping on virtually all laptops and desktops for a year now, and both the ASUS and Toshiba Ultrabook engineering samples that we have seen have a single port.

We guess that the reason behind this is that Intel doesn’t have native chipset support, and Acer doesn’t have space on its motherboard for a USB 3 controller, but this really does work against the S3. This will likely change when Intel’s introduces its next generation Ivy Bridge processors next year, but given the restricted inbuilt storage not having USB 3 is a major minus for us.

When Intel launched its second generation Core I processors earlier this year, it was clear that they were built from the ground up to be excellent mobile processors. Not only are they designed around quickly jumping in and out of low power states, the graphical capabilities had been improved to the point where they could be considered good enough to use without strapping a discreet graphics chip on.

It is this core design philosophy that has enabled to creation of the Ultrabook. This new category of laptop (which Intel has trademarked) is not only designed to take on Apple’s Macbook Air, but to do so at price points that are also competitive. If manufacturers can’t offer a model at less than $US999 they can’t use the Ultrabook naming.

There are various other restrictions on what Ultrabooks can and can’t be, much like netbooks manufacturers need to comply with these to get the supplies they need from Intel. Unlike netbooks though, the hardware inside the Ultrabooks is very similar to that seen inside every other Core I laptop on the market.

We say similar, because Intel has come up with special versions of its Core i3, i5 and i7 processors designed for the power and thermal requirements of small chassis laptops.

Acer has versions of the S3 Ultrabook with each of these processors, but the one we have been testing uses the Core i5-2467M. This comes alongside a respectable 4GB of DDR3 and a 320GB HDD. While the hard drive seems a touch small, it is largely limited by the miniscule space inside the S3 chassis.

The processor will have the most influence over how the S3 performs in our benchmarks, although the shift to SSD will make for a generally more responsive (and expensive) machine. In order to see just how the sleek styling of the S3 matches up to real laptops, we have compared the results of our real world tests with those seen in our Sandy Bridge laptop roundup a few months ago.

Somewhat astonishingly, the S3’s Core-i5 2467M manages the same overall performance score as the lab-winning Lenovo Ideapad Z570 did. That laptop cost slightly less but packed a Core i5-2410M CPU into a chassis that was much thicker and twice the weight of the Acer. Where the Lenovo beat out the Acer though was in multitasking, where the S3 scored 0.4 vs the Lenovo’s 0.53.

But that’s a trade off that doesn’t seem too bad, considering that our actual experience with the S3 has been smooth. You wouldn’t want to treat it like it had the grunt of a high end desktop, but the S3 delivers a perfectly competitive mobile computing experience.

Out of curiosity we ran up our Crysis benchmark on the S3, not expecting too much. It ran surprisingly smoothly at low detail, delivering 24 frames per second. Anything higher was unplayable, but this reinforced that the processor graphics in the Core i5 are going to be capable of light gaming.

With the S3 ticking all the performance boxes we moved on to tests designed to see how well it performs day to day. The first was our battery life benchmarks, run with both heavy and light workloads.

In the light use tests, which focus on constant web browsing until the battery runs down, we saw the S3 last for five hours and twenty five minutes, which would be impressive in a larger laptop (and actually better than most of the ones in our recent grouptest).

Even under heavy use, which involves a near unnatural workload of Cinebench loading down all of the processing cores, it lasted for two hours.

Our last test was one we like to run on thin laptops, seeing how well the chassis copes with heat. We re-run Cinebench until the CPU temperature evens out, and see just what that point is. On the S3 we were unable to push the CPU above 70 degrees – this seems high, but is significantly lower than what we have seen coming from Macbooks, for example, where we have seen temperatures top out around 100 degrees.

The S3 does get warm to the touch in the rear left hand corner, under where the processor is. But it is quite bearable. Because Acer has placed the ventilation along the rear hinge, it does get a little warm behind the unit as well, but not to any uncomfortable degree.

Acer has made a truly wonderful piece of hardware with the S3, one that would be catapulted to the top of the A-List if not for one thing: the lack of USB 3. While you can make do without it, it really is the most useful new addition to the PC in years. When using a laptop with such small inbuilt storage you’ll eventually need to put your data on some sort of external device, and USB 3 just makes the experience exponentially better.

Sure, you could head straight for the cloud, but the simple fact is that the Ultrabook market is going to be tight and incredibly price competitive. Competing models have single USB 3 ports, and that makes the omission significant.

If you get past the USB 3 though, this is as astonishing product – both proof positive of the Ultrabook concept and a lovely piece of design in its own right. What this Core i5 and hard drive based model shows is that the concept works at the low end as well, and while an SSD is certainly desirable it isn’t necessary for the experience.