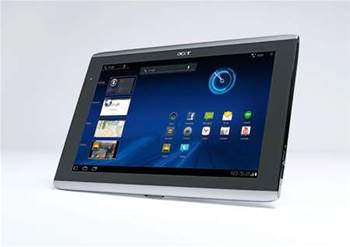 A fast, sleek Android 3.0 tablet with an array of connectivity options.

The A500 is part of Acer's recently released Iconia range. It comes in a few different flavours – 16GB and 32GB, Wi-Fi only or Wi-Fi plus 3G – and runs the latest version of the Android operating system, Honeycomb.

For the purpose of this test, iTnews' sister publication PC & Tech Authority looked at the 16GB, Wi-Fi only model.

Of the rather large number of tablets that have crossed the PC&TA Labs desks of late, the A500 is easily one of the best looking.

The brushed metal exterior is an extremely nice change from the glossy black or plastic finish that’s so prevalent in other tablets. It adds a little weight, but at 762 grams (slightly more than Acer suggest on its spec sheet), the A500 certainly isn’t a wrist-breaker by any stretch of the word.

At 13.3mm, the A500 is a little thicker than most, but any thinner and there’d be issues fitting in the USB port. In addition to USB, there’s also mini-HDMI out, microUSB, microSD, a headphone jack and a proprietary docking port. A volume switch and an orientation lock button round out the set.

The Acer Iconia A500 is one of the best looking tablets on the market.

Performance wise, the A500 is a treat, making excellent use of its dual core Tegra 2 1GHz processor. The OS runs crisply and quickly, even with all animations – including an animated desktop – turned on. Cold boot-up is just under 42 seconds and the browser was able to fully render the ABC site in slightly over four.

Acid3 test results were also extremely encouraging, with a full 100 percent being scored. At all times, whether gaming, browsing, checking email or even using the virtual keyboard to write, the A500 felt almost over-powered compared to many of the tablets we’ve tested.

Streaming video via the ABC iView service was quick and crisp, with excellent sound, although we were unable to stream video from a home media hub using the A500, with the device insisting that streaming was not supported and the file needed to be copied fully. This was notably strange as the original Samsung Galaxy Tab, a vastly less powered device, was able to stream the same file with no issues.

Acer has included its clear.fi DLNA-based technology for just such a function – it’s an extra step, but the interface is simple, easy to use and connects quickly to any home network.

We also had some issues with the USB port initially, but after downloading a free file browsing app from the Android marketplace, we were soon able to browse and access USB-stored content.

The USB port was initially problematic.

Battery life seemed solid, with 46 percent remaining after the testing and having the A500 left on and in standby mode for 48 hours. While we hadn’t done anything super intensive – such as watching a full length movie – it’s encouraging given some of the poor battery life we’ve seen in mobile devices of late.

In all, Acer has produced a very well-designed tablet. Build quality is excellent and overall performance is impressive. While much of our enjoyment can be attributed to (finally) being able to use Honeycomb, the A500’s hardware allows the OS to show off its strengths.

As a new OS, Honeycomb takes a little getting used to: some of the functions that are familiar to Froyo and Gingerbread users are a little different, and the app store still has an emphasis on apps for phones rather than anything maximised for tablet use, but overall the experience is enjoyable and productive.

Of course in the current market one cannot discuss tablets without mentioning the iPad 2. The A500 is 5.3mm thicker and 160g heavier, which will be a deal breaker for many users, although the price is certainly right. But Acer has definitely produced an alternative, if not a killer, that Android fans will appreciate.