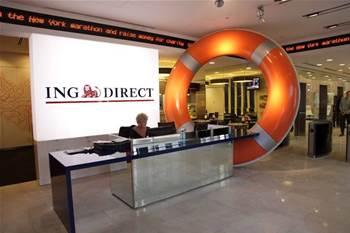 ING Direct Australia has begun upgrading some 1200 end-user machines from Windows XP to Windows 7, with a view to rolling out Windows 8 as soon as practicable.

The bank is working towards deploying Windows 7 throughout its offices in the Sydney CBD and Tuggerah, on NSW’s central coast, this quarter.

Chief information officer Andrew Henderson described the rollout as “phase one” of an eventual move to Microsoft’s latest operating system, Windows 8, as well as Windows Phone 8 for the company's mobile fleet

Windows 8 is expected to reach the enterprise market from August.

“We have to move through Windows 7 to get to Windows 8,” Henderson told iTnews.

“What we’re doing is commoditising, reducing some of the complexity, we’re getting to a baseline standard, and from there, to go up.

“If we see Windows 8 come out, and we’re comfortable with it, then why wouldn’t we upgrade and roll that out seamlessly early part of next year.”

He expected the organisation’s mix of PCs and laptops to skew towards more mobile devices over time, should the business embrace working from home or activity-based working.

“We’re enabling the business to start to think about ‘can we now change the way that we’re operating as a result of that [new technology]’,” Henderson said.

“We’re leveraging Microsoft capabilities out of the box — that can be everything from Exchange to SharePoint to Lync — and having that available to our business ... wherever they need it.”

Henderson hoped the Windows 7 rollout would give his IT team of 150 a “baseline” standard from which to deliver more rapid operating system upgrades.

Faster upgrades would allow ING to keep pace with technology that staff used at home, Henderson said, noting that that the bank’s global licensing agreement with Microsoft allowed it to upgrade to Windows 8 as soon as it liked.

“We’re getting to a position where we’re [establishing] a baseline standard and will then deliver that continual upgrade capability to the business after that.

“It could be that I standardise on Windows 8 from an end-user device perspective within ING Direct. On top of that, then, we would look at deploying Metro-enabled apps into our backoffice or into our sales team, for example, to support what they’re doing.

“For us, it’s really just a question of what’s the business impact of a rollout like that. In terms of the technical rollout of Windows 8, we’re gearing up to do that fairly simply. It won’t be a technology project necessarily; it will be more of a business evolution project.”

In addition to its standard operating environment upgrades, ING Direct plans to refresh its 350-strong mobile fleet to devices running Windows Phone 8 in order to offer staff a standard experience across all desktops, laptops, tablets and smartphones.

The bank is looking to replace Optus-supplied iPhone and BlackBerry devices with smartphones from Telstra.

Henderson said staff would benefit particularly from being able to access SharePoint documents seamlessly across all Windows 8 and Windows Phone 8 environments.

“I’d like to have Windows [Phone 8 smartphones] rolled out by the end of the year,” he told iTnews.

“We’ll eventually standardise on Windows 8, primarily because of integration, consistency of experience, [and end-to-end] security models.

“The obvious choice would be the Lumia devices, but we’ll have to see technically what lands, what’s available through our telecoms provider, and we’ll assess the fleet then go.”