Hyperconverged stares down the challenge from cloud 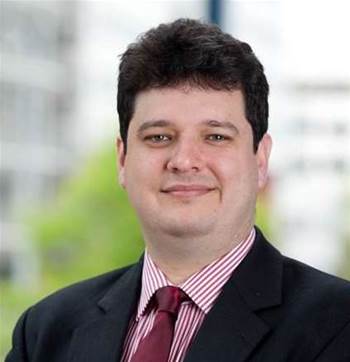 Peter O’Halloran: “It allows you to get some of the benefits of cloud".

Blooded on VDI installs, can it transition to platform player?

But it’s what he – and other CIOs and infrastructure managers – do in their next refreshes that will either make hyperconvergence a mainstay of the enterprise data centre or simply a stepping stone to somewhere else.

Hyperconvergence combines server and storage (and increasingly networking) in a single piece of hardware that is optimised to run virtualisation software. Hyperconverged systems are typically fast to deploy and easy to manage and scale out.

VDI has emerged as one of the base use cases for hyperconvergence – what Gartner research director Michael Warrilow calls its “classic early win”.

Hyperconvergence found traction with early VDI projects because it solved two problems: it smoothed performance issues and improved the economics, which is why – as is the case with the National Blood Authority – VDI is now the enterprise entry point for many a hyperconverged system.

But it’s a pigeon hole that hyperconvergence vendors are doing their best to escape.

“But 60 percent of our customers are [now] running tier-one mission critical workloads on [it].”

“If you came here with the perception that this is a company doing VDI or some niche thing I hope this is just the beginning of changing your perception,” Ting said.

Warrilow sees no reason why hyperconverged systems can’t transcend VDI and carve out a permanent – even prominent – space in the enterprise data centre.

However, that level of future prominence is likely to come down to how long CIOs are still willing to keep running their own hardware.

It’s a question on O’Halloran’s mind, though one he won’t have to deal with for at least another year when the “next round of infrastructure refreshes” come up.

“If we stay in-house then we’ll probably look at more hyperconverged over time,” O’Halloran said.

“Whether I can get it all there I don’t know, but I think hyperconvergence will be a stepping stone to cloud.”

Warrilow believes the future is likely to have space for both cloud and hyperconverged infrastructure.

“The growth rates for public cloud and hyperconverged are very similar, and that’s because they’re not mutually exclusive,” he said.

“For situations where public cloud isn’t the right option, hyperconverged can be part of the solution.”

In a cloud frame of mind

Office-based employees use zero clients to access the VDI environment, while remote workers can access it through a variety of device types. O’Halloran uses a Surface Pro since he spends “half [his] life on the road”.

According to O’Halloran, “73 percent of staff use VDI outside the office at least once a week.”

O’Halloran said he was “sceptical at first” when it came to hyperconverged infrastructure.

“To some extent it was an experiment for us to see if all the hype was there and it performed the way it said in all the press releases,” he said. “But I’m a convert.”

O’Halloran took advice from Federal Treasury, which at the time had deployed hyperconverged infrastructure under a VDI install, before pushing ahead with his own deployment.

“It came down to the amount of time and budget I had to do the VDI project,” O’Halloran said.

“The attractiveness for us was that within three or four weeks of the kit arriving in the building it was racked, fully working, with full SOEs built and deployed.

“It was just plug in the box and not quite away you go but close enough to it.”

O’Halloran also likes that it is low-touch. “It just works and it doesn’t require effort and maintenance.”

Even if he is unsure where hyperconverged might fit into his IT architecture and strategy in the mid- to long-term, O’Halloran believes its introduction is beneficial.

“It allows you to get some of the benefits of cloud and look like you’re cloud without actually having to go to the cloud,” he said.

“From my perspective it’s also been useful to manage the changing skillsets and expectations of my technical staff. It’s getting them used to the concept that they don’t have to maintain all the networking between [IT infrastructure] and all the configurations.

“So for me it’s almost getting my [staff] ready to go to the cloud if that’s the way we decide to go in the future.”

The future of hyperconverged

In the immediate future, hyperconverged infrastructure is being pushed as a cost-effective way of serving the IT needs of branch and remote office environments.

“The hyperconverged space is growing considerably in the Australian market, with mid-sized companies and enterprises with remote offices/branch offices increasingly looking for solutions that are cost effective, as well as easy to deploy, manage and integrate with their existing infrastructure,” HPE South Pacific’s software-defined storage and hyperconverged systems specialist Brendan Sit said.

In the mid-term, hyperconverged infrastructure is likely to incorporate more networking functions. “The next journey the vendors are on is into networking, and some of them are already well on their way,” Warrilow said.

In the longer term, hyperconverged vendors are likely to face challenges to their relevance, and that has some looking well beyond what else they can pack into the box, and more to what they can build around it.

Nutanix CEO Dheeraj Pandey likens the challenge to that of the iPhone. Apple took a bunch of components – a phone, a camera, a music player - and combined them into one piece of hardware; however, it was only “when the APIs came together it became a true platform”.

Pandey believes hyperconvergence is on a similar trajectory.

“If you look at our history, the industry was fascinated by components – virtualisation, storage, and compute – and then we brought it all together into this product that the world came to call hyperconverged,” he said.

“But this is not the end. It’s only the beginning of where this journey will actually go.

“This all has to come together into a platform, and this platform is going to be one of the hardest journeys for us. How do we really make it pluggable, programmable, and API-driven for networking, security, data and everything else that will help others create applications on top of it?”