Death threats, the Mafia, and Steve 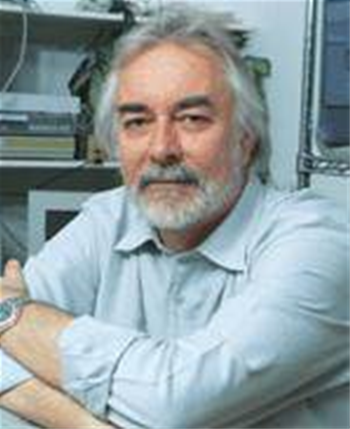 Out on the Thames is a man who cannot stop rocking the boat. David Quainton gets inside Spamhaus.org

Don't worry," says Steve Linford, as the room begins to sway. He leans back in his seat and begins to detail how he takes death threats more seriously these days.

To his left, unaffected by seasickness, a dozen computers work overtime, tackling billions of spam messages. Over his shoulder a magpie spears out of the Hampton countryside, and plants its beak into one of the windows.

This is not going to be an ordinary interview. But then, Steve Linford is no ordinary anti-spam campaigner.

Linford's recitation begins with the person whose houseboat bobs up and down next door.

"That's Dave Gilmour's boat," says Linford. Gilmour played guitar with Pink Floyd. "I worked as production manager with them for 15 years. In the eighties, it all moved over to computers. I enjoyed using them, and in 1986 set up a company." After quitting life on the road and returning to the South East, Linford's business evolved with the formation of the web, eventually becoming hosting company Ultradesign.

But he received hundreds of queries from customers asking how to deal with spam, which led to his founding Spamhaus in 1998.

It has since become the world's leading voice against spam.

Over the past seven years Linford and his small, dedicated, volunteer army have pushed for anti-spam legislation around the world. They have highlighted how ISPs exacerbate the spam problem, and they have provided a continual stream of information to law enforcement agencies trying to bring justice to an increasingly organised spam underworld. But Linford remains coy about his achievements.

"I don't know if it's all down to us," he says. "There's pressure from elsewhere too. But I think we're probably the most vocal. We were consulted directly about the Australian law, which has cut the spam problem there almost completely. I've spoken in Geneva, and we've been helping the Chinese."

Spam has been clogging email inboxes for years, with adverts for pornography, Viagra and get-rich-quick scams arriving at a dizzying rate. But three years ago the picture changed slightly.

"Around Easter in 2002 virus spam started, and the problem took a different road," says Linford. "Viruses were commissioned and built to take over machines. It was when the criminal element got involved." A criminal element, in fact, that would worry even the most committed campaigner. After 2002, spam was no longer the preserve of individuals trying to make a quick buck. It was now the domain of organised crime.

"They try everything they can. I've had countless death threats, although initially we didn't take them seriously. The people we were chasing were your average small-time fraudsters," says Linford, seemingly recalling more innocent, halcyon days. "Now it's gangs, Russian-type gangs and the Florida- and Miami-based gangs. These are guys you have to take seriously."

Seriously enough to make me start edgily looking over the Thames, unconsciously watching for the glint of a sniper's scope in the distance.

"We know who they are though," says Linford. "We know them all. All the information is on ROKSO."

The Register Of Known Spam Operations is another part of the Spamhaus service. Currently, America's Alan Ralsky, Michael Lindsay and Andrew Westmoreland sit atop this list of the world's most prolific spammers.

Further down are the spammers from Brazil, Russia and Ukraine. And these are just the "nice" ones.

"There is a whole bunch of them we can't put in public," continues Linford.

"A second part of ROKSO is only used by law enforcement agencies. The New York Mafia and Australian Mafia are involved."

Linford moves on to the lighter topic of the almost comical efforts at anti-spam legislation.

"Australia is the only place that brought in good legislation, and saw it work overnight," says Linford. "The reason is because of huge penalties, and because law enforcement backed it up. Every spammer received a letter telling them to stop what they were doing or face the consequences." Australian spammers face a $1.1 million fine every day they continue to spam.

US legislative efforts, by contrast, such as the Controlling the Assault of Non-Solicited Pornography and Marketing Act (Canspam), have been failures, states Linford.

"In the US alone, there are 23 million small businesses," he says. "The Canspam act tells all of those you can send as much junk as you want – it's all legal. Canspam has created far more problems than it's solved."

In Linford's opinion there are currently three legislative camps. Australia nailed the problem the first time. The US will eventually bring in effective legislation after many years of piecemeal changes. China simply does not understand.

"We tell the Chinese that 70 per cent of spam is hosted in their country," says Linford, getting animated. "And they don't understand. They see the problem with sending spam, but don't realise the advertising and hosting of websites needs addressing too."

"We had to explain that it's not Chinese people using these websites," says Linford. "It's criminals from America. These people aren't likely to listen to a polite request."

But China is finally approaching a solution – its own anti-spam legislation is imminent. Linford, however, thinks it will not be strong enough.

"I don't think it will be as effective as Australian law," he says, "and enforcement is going to be difficult. China Telecom claims to own the Chinese network. But we met their spam-abuse department and it was one teenage-looking guy who worked part-time!"

The spam behemoth, though, is the US, with four times the spam operations of any other country. Many of them are based in Florida, for reasons Linford makes clear.

"Florida state law is incredible," says Linford. "Legislation protects criminal assets, which is why so many crooks are based there. You can take someone to court in Florida, but assets cannot be touched. Al Capone can be put in jail, but you can't take his villa or his possessions."

The knock-on effect of this is that spammers such as Ryan Pitylak, recently hit with a $2 million lawsuit by Microsoft and the state of Texas, happily continue spamming, safe in the knowledge their business will not be harmed.

But all is not doom and gloom.

Linford sees the fact that China is bringing in some form of anti-spam legislation as very positive, and expects EU-wide legislation, similar to the Australian model, within two years. He even expects the US to get it right eventually.

But the problem is not just legal. The problem is also the companies that have the power to stop spam today, if they wanted to.

"I'm constantly pressurising ISPs to do something about this," says Linford. "They could cut spam instantly. It really is that easy. [But] it's the sales people. These firms are run by marketing and lawyers. It's all about making money."

MCI comes in for a particularly vociferous attack. It has long been the spammer's friend, topping Spamhaus's list of ISPs that host spam organisations. MCI insists it has a zero-tolerance policy, but Linford sees it very differently.

"They make millions from hosting spammers," he says. "The amazing thing is MCI is now portraying itself as a security company, saying that it blocks spam. To do this it's using public blacklists – our technology!"

Over the next few months Linford will receive more death threats, see the introduction of ineffective Chinese legislation, and bear witness to the changing of seasons that makes working on a houseboat worthwhile.

An advertising campaign alerting the public to the threat of opening and replying to spam email has been mooted for the future, he says.

Until then, Linford will continue his campaign. Although it is a long way off, he foresees a time when spam is almost wiped out.

"Spamhaus's whole aim is to put itself out of business. We know we'll never stop spam, just get it to some manageable level about eight years down the line from now," he says. "Governments will ban spam, ISPs will improve their policies and we'll have succeeded. But there's still a long way to go yet."

Before being driven back to Hampton Court train station, cossetted in Linford's tank-sized black Range Rover, there is time for one last question.

Why doesn't he set up his own spam operation, and rake in the cash?

"But if I did, I'd probably be able to set up a very good spam operation," he says. "Very good indeed."

Got a news tip for our journalists? Share it with us anonymously here.
Copyright © SC Magazine, US edition
Tags:
anddeathmafiasecuritystevethethreats