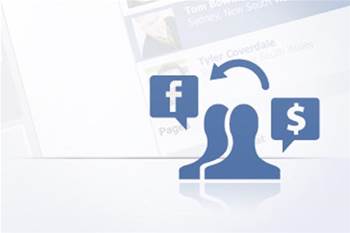 The Commonwealth Bank has developed a Facebook version of its Kaching mobile app, allowing customers to make and request payments from within the social network.

The Facebook application will be launched in January, targeting what CommBank chief marketing officer Andy Lark estimated to be “many, many billions of dollars” in peer-to-peer payments.

“Scout club, Girl Guide club, school trip, paying your friends because you’ve all chipped in to do something this weekend … those little transactions add up to be a very, very large number,” he said.

“What we’ve learnt is there’s an enormous appetite to make those payments very frictionless and easy to do, and people like the social element.”

CommBank this week said the Kaching mobile application had been downloaded 700,000 times and accounted for a total of $3 billion in transactions since its introduction last year.

Kaching users made an average of six percent of peer-to-peer payments to their Facebook friends.

Lark noted that Facebook had some 12 million Australian users currently, accounting for more than half the Australian population.

When introduced, the Kaching Facebook application will allow CommBank customers to direct payments to mobile numbers, email addresses, Facebook friends, groups or events from within the social network.

They can also make and request payments through the application and notify friends by private Facebook message or on their public walls.

All transactions are routed through CommBank servers and surfaced through Facebook’s Graph API.

Kaching for Facebook requires an HTTPS connection, with the bank offering what Lark said was a “100 percent security guarantee”.

“We have taken Kaching and put it into Facebook so you don’t need to leave Facebook at all,” he explained.

By mid-December, CommBank also hopes to launch a new version of its Kaching for Android application, breaking away from some aspects of its iOS-centric design.

The Android application was introduced in July. Lark said its initial design was informed by hundreds of hours of discussions with customers.

But the bank had since decided to build an Android-specific interface to account for differences like Android users’ preference to scroll downwards while iOS users tended to scroll sideways.

“Building homogenously for Android and iOS was something we had to move away from,” he said.

“We’ve spent a lot of time now building a new version of Kaching specific for the Android user.”

CommBank’s platform-specific design philosophy has set it further apart from rival ANZ Bank, which has been building a cross-platform mobile application in Asia.

“Particularly in Asia, where we don’t have a lot of branches, we want to roll out a mobile banking proposition. So we’re designing for the mobile, but it will also be accessible by PC.”

Weatherston said the new mobile application would reach Hong Kong, Singapore and potentially Australia next year, and offer a more seamless experience across other channels including contact centres and branches.

“You might have an iPhone but also an Android. Currently goMoney is a separate experience on the Android and the iPhone,” she said. “In this world, it should be identical.”

ANZ launched an Android version of goMoney in September. The application was built from the ground up, with the bank highlighting device fragmentation and security as initial challenges.