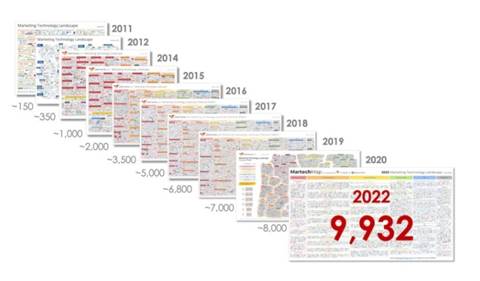 Chiefmartech and MartechTribe’s 2022 marketing technology landscape reveals that the martech industry has exploded in size with 9932 solutions now available.

The report reveals that the industry has grown by an enormous 6521 percent since 2011 to date, and since 2020 has seen 24 percent growth.

According to Scott Brinker, editor at the Chief Marketing Technologist blog, chiefmartec, “new vendors keep entering the market (and more who have been in the market keep getting discovered in our ongoing research). While 972 vendors were removed, a whopping 2,904 vendors were added, which brought the net total from 8,000 to 9,932.”

The accompanying State of Martech 2022 report reveals that while the martech industry, like every industry, faced uncertainty in response to Covid, the pandemic actually became the catalyst for a digital transformation acceleration in the sector.

“Yes, there’s been a ton consolidation over the past two years. Many martech vendors were acquired, disbanded, or pivoted to something different. But the number of new entrants, from start-ups and more mature companies offering a martech service, still outpaces the forces of consolidation,” the report says.

The new wave of martech start-ups was inspired by a need to streamline operations and deliver better experiences for customers, pushing demand in the sector in the last two years.

While every category experienced growth, the largest growth occurred in content and experience, with 34 percent growth, and commerce and sales, with 24 percent growth. The slowest growing martech category was in data with a growth of just 7 percent.

Investment bank in martech LUMA Partners reveals that M&A activity in the martech industry has seen significant movement, with 157 mergers and acquisitions in 2019, 85 in 2020 and 166 in 2021.

The authors reveal that one in five of these deals were valued at more than $100 million.

“It’s a testament to just how large the martech industry is that so many significant acquisitions are constantly occurring,” the authors write.

“Cloud, API, and app platforms all enable developers to build on, extend, or integrate with their services. This makes it easier for more apps to be created, “standing on the shoulders of giants” below,” the report says.

While platform consolidation takes place, the authors believe that this is a driver for developing custom apps.

“This is the dynamic with Apple and Android that has resulted in millions of mobile apps. It’s a virtuous cycle, as the more apps built on a platform further increase that platform’s strength — attracting even more developers to build on it.”

I have read and accept the privacy policy and terms and conditions and by submitting my email address I agree to receive the Digital Nation newsletter and receive special offers on behalf of Digital Nation, nextmedia and its valued partners. We will not share your details with third parties.
© Digital Nation
Tags:
chiefmartechmartechmartechtribe
By Velvet-Belle Templeman
May 4 2022
11:50AM