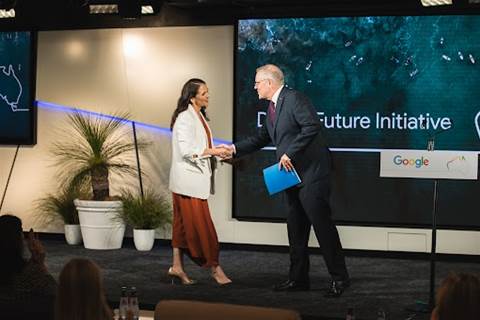 The Digital Future Initiative is an investment of $1 billion over five years, and Google says research it commissioned suggests the investment could support more than 28,000 jobs and deliver $6.5 billion in total economic impact.

The investment will focus on the foundations of digital infrastructure, the first Australian Google research hub and partnerships including a collaborating with CSIRO.

“The announcement by Google is a $1 billion vote of confidence, I believe, in Australia's digital economy strategy. It is backing in the plan that we've set out, a $1 billion dollar vote of confidence in our economic recovery, and along with ensuring, together with our great allies and partners in our region, the national security of Australia,” said Prime Minister Morrison.

“Australia's digital strategy is central to securing that recovery plan that puts business, investors, entrepreneurs in the driver's seat to realise the opportunities that are ahead. Today's announcement by Google demonstrates that we are taking the right approach and it recognises the digital leadership that is necessary for Australia to emerge as a top digital economy by 2030.”

Google CEO Pichai said that the investment will focus on cloud computing, broaden local tech talent in Australia, and create partnerships to solve both Australian and global challenges.

“We believe a strong digital future is one where everyone has access to technology and the skills to use it. Where the internet economy fulfills its immense potential. And Australia's long tradition of innovation,” said Pichai.

Chargé d’Affaires of the US Embassy, Goldman said the investment is an example of how liberal democracies and open societies are “positioned to deliver for our people.”

“It’s a partnership that will increase our shared prosperity, resilience and global competitiveness, literally for decades to come.”

“The national science agency CSIRO solves the world's greatest challenges through innovative science and technology, but we don't do it on our own. No matter the scientists, no matter how amazing the invention, it actually takes a company to make it real.”

“We're both focused on using science and technology to change the rules of the game. And by working together, we can deliver a seemingly impossible trifecta of sustainable and societal benefit at the same time as real sustaining profits for business.”