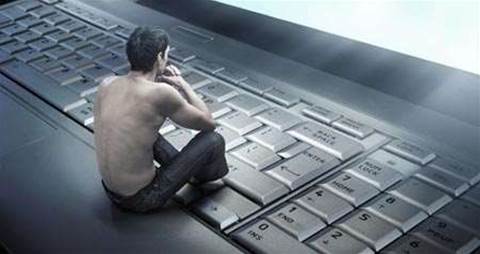 [Blog post] The numbers say a slowdown, so why can't NBN Co?

NBN Co isn't suffering the ill effects of the construction industry's Christmas shutdown, nor is it about to suddenly "ramp up" fibre rollout efforts now that the silly season is over.

This whole fibre ramp-up narrative has gone on too long. Take a closer look at the numbers and you'll see there is no longer a reason to believe a word of it.

Unlike under Labor, NBN Co now publicly reports its fibre rollout progress weekly. Less is written about this data than in the era of publicly-accessible Ready For Service spreadsheets, but it is by no means less revealing of the company's true state of affairs.

The idea that Christmas and New Year is some sort of blip in an otherwise J-curved rollout trajectory isn't grounded in fact.

Firstly, there was a much longer "blip" in the fibre rollout between September 30 and October 20, 2013. Would this be the result of an "October long weekend" tools-down by the construction industry? I doubt it.

Secondly, NBN Co's weekly numbers are all over the place. They're certainly not the constant 5000 a week that executive chair, Ziggy Switkowski might have us believe.

In 18 of the 29 weeks since the beginning of July 2013, NBN Co did not pass 5000 premises. It managed less than 3000 in nine of those weeks, underscoring the variability in fibre rollout numbers on a week-to-week basis.

I've put these results in a rather jagged-looking graph: 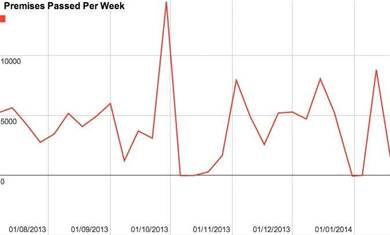 In other words, don't expect the premises passed numbers to rebound and then grow at an ever-increasing weekly rate. History shows it didn't happen before the Christmas blip, providing little comfort that it will happen after.

It's also worth pointing out that NBN Co's contractors didn't actually down tools over Christmas anyway, despite all outward appearances.

Contractors might not have physically increased the size of the footprint, but they were still working. They actually made good in-roads in the fortnight converting unserviceable premises (classified as service class zero) into serviceable ones. Just under 2000 premises were made ready to carry retail services. This is not obvious when you're only looking at the topline 'premises passed' number searching for a headline.

If that's not enough, NBN Co has no incentive to "ramp up" the number of premises it is passing with fibre.

Unlike under Mike Quigley's reign, the company is no longer challenging itself with stretch goals for construction.

To reach its underwhelming 357,000 premises passed target for the end of June 2014, it only needs to build at half the pace it has been moving since July 2013.

By iTnews' calculations, NBN Co needs to achieve a week-on-week (compound) growth rate in premises passed of 1.01 percent to surpass the 357,000 mark.

The company is currently expanding the number of premises passed week-on-week by between 1.92 and 1.95 percent, depending on whether you take a mean or median view.

On that basis alone, it's pretty easy to dismiss the narrative of a fibre ramp-up.

If NBN Co *did nothing* special — that is, if it maintained its present rate of construction — it would reach at least 439,651 premises passed with fibre by the end of June this year.

It's also safe to assume that if NBN Co only meets its June target — rather than smashing it by at least 80,000 — that the company is purposely slowing the fibre rollout to fit the new Government's policy position.

As the former Communications Minister Stephen Conroy put to Ziggy at a Senate committee hearing last month, "you actually have to tank the rollout to meet your own target."

Footnote: Ziggy isn't — how should we say — particularly enamoured by the prospect of outsiders running NBN Co's numbers to form their own conclusions. "To have people from outside the organisation attempt to reinterpret our forecasts is ludicrous," he said last month. We'll assume that also includes this blog.