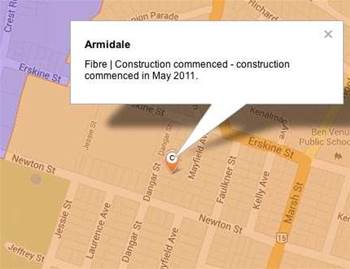 NBN Co has re-asserted itself as the sole source of rollout information on the national broadband network, pulling offline the remaining data sources used by myNBN.info and other sites to vet weekly progress of the project.

The company has slowly strangled myNBN.info over the course of the past month by gradually revoking access to the publicly-available datasets the site relied on.

"NBN Co has removed all datastores used by me to update myNBN and provide weekly updates [to the Whirlpool broadband forums]," myNBN.info founder Kenneth Tsang said in a forum post late last night.

"It's been a frantic last two weeks of recoding, with removal of the three main source files I've used — and I'm at a loss as to what to do.

"Until I do work something out, I will have to provide manual updates on rollout progress and on myNBN."

Ostensibly, the changes were made to improve the performance of the mapping tool, but they also have the convenient knock on effect of removing NBN Co from public scrutiny of its numbers.

NBN Co has made no secret of concerns that myNBN makes use of official data in ways that were never intended.

Tsang saw the latest set of changes coming. On Monday this week, he contacted iTnews after NBN Co changed the way it served the "pins" on its maps. 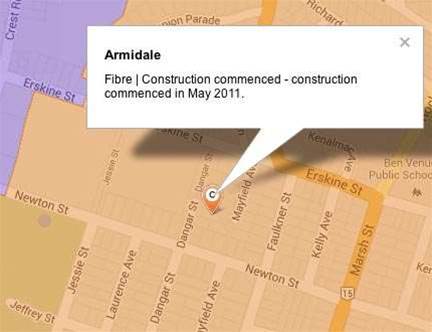 A rollout "pin" on the NBNco.com.au official map.

"NBN Co has switched over to utilise Google Maps Engine to serve the NBN Rollout Pins that were previously stored in KML files," Tsang said.

"NBN Co had previously relied on using encoded polygons and KML files to render the areas and pins for active and work commenced areas."

Tsang said the change occurred on September 5, but the KML files had been left on the NBN Co website.

He expected they would be removed sooner rather than later "as the files are no longer requested for" by the official maps feature, and he was right. Less than 24 hours later, they were pulled offline.

There is now little chance to check on the weekly progress of the NBN unless you happen to be a retail service provider (RSP) that receives such information under non-disclosure.

NBN Co is still publishing its Ready For Service spreadsheet each month, though past months have been light on detail for brownfields and fixed wireless rollout areas.

The incoming Coalition government has pledged to operate NBN Co "in a totally transparent way".

Now is their chance to prove it.