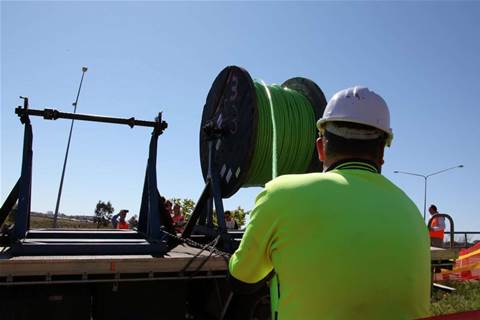 [Blog post] Trying to make sense of the Coalition's backflip on competition.

An average of 1000 homes and businesses a week have activated an NBN fibre connection in built-up parts of Australia since the beginning of March 2013, but fibre's popularity may not be enough to snare it a more prominent share in Malcolm Turnbull's multi-technology mix.

An analysis of activation statistics by iTnews reveals that NBN Co has enjoyed healthy interest in those residential 'brownfields' areas lucky enough to be selected for a fibre connection.

Average and median take-up of brownfields fibre connections since the start of March 2013 comes to 1000 and 1049 premises a week respectively. Over the past 27 weeks, brownfield fibre activations only dipped below the 1000-mark twice, coinciding with the New Year 2014 period.

In the most recent set of data released by NBN Co for the week ended January 26 this year, activations came in at the second highest on record — 1604 in a single week. The highest ever weekly result was 1625 activations, set in late September 2013.

The fact that take-up rates are climbing as the weekly premises passed figures plateau is testament to the popularity of the former government's plan among those still lucky enough to benefit from it.

Time to put in more fibre?

The new government gave contractors rolling out these fibre connections permission to continue their work in recent weeks after a long hiatus.

These new take-up statistics will be ammunition for those arguing for the new government to include more fibre in its revised NBN.

Communications Minister Malcolm Turnbull's unexpected about-turn on infrastructure-based competition this week puts him in a difficult position on that front.

In late 2012, Turnbull argued that demand for NBN fibre — or "broadband" for that matter — should hardly be considered surprising. But he stated that Australia's soaring fibre take-up figures were distorted by the lack of infrastructure-based competition in Labor's NBN model.

Take-up rates for fibre-to-the-premises connections on a worldwide basis were generally "low" or "weak" because the connections were simply too expensive compared to other wireline services on offer in those markets, he argued.

Australia should exhibit higher FTTP take-up rates than the worldwide average, Turnbull said, because NBN Co faced no such long-term wireline competition from HFC or DSL. Under Labor's NBN model, incumbent networks would be progressively shut down in NBN areas, leaving customers of these existing networks no option but to move onto the NBN.

If anything, he said, take-up rates were still too low considering NBN Co's monopoly, and the money and incentives pumped into marketing the NBN.

"... Users in [NBN-served] districts haven't been persuaded that fibre offers anything worth switching over to ahead of the last possible moment when they have no other choice."

It's a scathing assessment he might have to revisit.

This will shutter plans for competitive builds by TPG and Optus.

Turnbull claims the lack of infrastructure-based competition makes the NBN appear more popular than it is. By maintaining the anti-cherry picking laws, he saves himself the potential embarassment of allowing private companies to compete with NBN Co in built-up areas - only to find that a fibre NBN connection is what Australians preferred in the first place.

For the data purists among you, it is possible to take a much longer-term view of activation figures for brownfields fibre.

NBN Co released some quarterly and half-year updates on the numbers under the ALP Government, and iTnews has calculated weekly averages as far back as the start of July 2011.

Unsurprisingly, this produces a lower weekly average of 424.5 premises activating brownfields fibre connections between July 2011 and now. The median would be 124.46 activations a week. 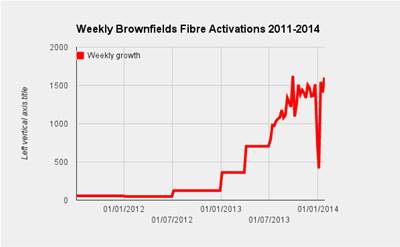 While it is an interesting exercise, we're unconvinced that it undermines any argument that Australians prefer a fibre connection. It takes into account an era when NBN Co simply passed less premises as it built up capability.