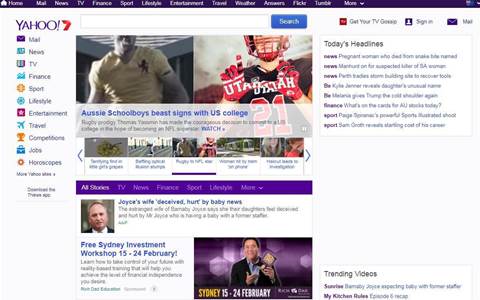 Yahoo7 will make reductions to its back office technology teams following the restructure of one of its two parent companies, Oath.

In Australia, Yahoo7 is a joint venture owned by both Oath and Seven West Media.

Yahoo7 yesterday said a strategic review with its two shareholders had identified a need to restructure its operations to make more use of Oath's technology capabilities.

It said its local brands would be unaffected "by this shift in the back-end tech platforms".

"This change would lead to a planned reduction in locally-produced bespoke platforms, and potentially across the associated teams. Smaller changes are also planned across the rest of the organisation," it said in a statement.

"Yahoo7’s mission is to be the Australian media leader in data, content and tech and this move will help them maintain that leadership in an increasingly competitive and challenging market.

"Yahoo7 will benefit greatly from the significant global investment Oath makes in technology."

CEO Ed Harrison said the company would focus its resources instead on local content creation and monetisation.

"In a rapidly growing digital media environment, scale is a critical competitive advantage. Through Oath we have a unique opportunity to benefit from enormous scale," he said in a statement.

"Of course, making changes is always difficult, especially involving our talented people, but ultimately this will ensure Yahoo7’s continuing success.”

The company did not detail the scale of the workforce reduction.