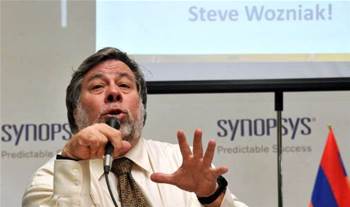 Would open Apple still be United States' most valuable company?

Apple co-founder Steve Wozniak has voiced a renewed desire to see the consumer electronics giant open its architecture to the masses, allowing savvy users to expand and add to their products at will.

The company's notoriously closed architecture has been the subject of debate for decades, with Wozniak himself pushing for the ability to configure and expand the products' software and hardware out of the box while an employee during the 1980s.

Though a fervent supporter of his former employer to this day, Wozniak told attendees of an event in Sydney that Apple could still open the architecture on its growing range of phones, computers and tablets to the masses for the greater good.

"I think that Apple could be just as strong and good and be open, but how can you challenge it when a company is making that much money?" he said.

He pointed to the possibility of introducing a programming language on the iPad, allowing Wozniak and similarly minded engineers to use the tablet as a new interface for creating software and other uses for the device.

Apple's objection to such use has led others to develop hacks that open iOS devices to unsolicited third party applications and provide the ability to significantly alter the operating system at will.

Its approach, Wozniak argued, differed to that of Facebook and Google which allow significant interaction with third party applications and transaction of user data.

Apple, on the other, "makes it very difficult to get into their calendar world, their contact world outside of the Apple stuff".

The company's approach significantly differed from Wozniak's own while working at the company, he said, recalling his push to allow the Apple II to have eight expansion slots for additional memory, external storage and accessories.

"Steve Jobs only wanted two slots - a printer and a modem is all people need. He never did engineering, he never wrote a program, he never came from what I did," he said.

"The Macintosh engineering group snuck a secret test board that could actually expand it but Steve Jobs got wind of that and cut it off."

However, Wozniak qualified his desire for a more open Apple with the argument that the openness should not impinge on the quality of the products themselves.

The ability for existing and new Apple products to interact with each other on their own, despite closing their existence to competitor products or third party applications, formed part of his continued love for the devices.