Windows 11 update brings Android app support in the US 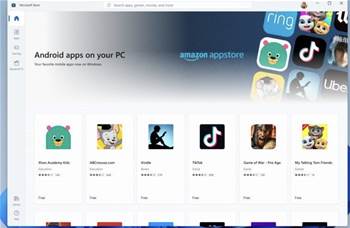 Microsoft has releaed a substantial feature update to its Windows 11 operating system bringing, among other things, support for Google Android apps to a general audience in the United States.

The company today said the update adds over 1000 more apps in partnership with the Amazon Appstore, available via the Microsoft Store that's built into Windows 11.

Amazon Appstore remains in preview form, having been tested since last year as part of Microsoft's early adopter 'insider' program for Windows 11.

Users have already worked out how to install the Google Play store on Windows 11, giving them a greater selection of apps than Amazon provides.