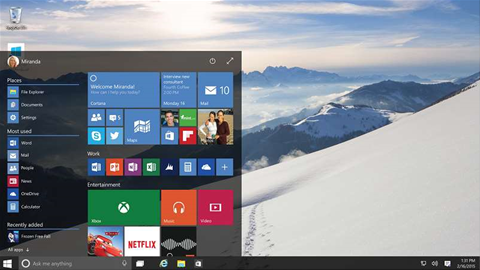 Microsoft has released a major update to Windows 10, claiming the latest version makes the operating system suitable for deployment in enterprise environments.

Code named "threshold 2", the update for the operating system also contains multiple, system-wide improvements and bug fixes, similar to service packs for prior versions of Windows.

Also known as build 10586, threshold 2 was selected as the final version after testing by volunteers in the Windows Insider program starting early November.

"Most importantly, with this free update we have reached the point in the platform’s maturity where we can confidently recommend Windows 10 deployment to whole organisations," Myerson said.

IT departments can use Windows Update for Business (WUB) to control update deployments in organisations. This includes setting up device groups for staggered deployments and scaling updates with network optimisations.

New device management capabilities allow admins to control systems running Windows along with apps and data stored on them, in bring your own device (BYOD) scenarios.

Another new feature is Azure Active Directory Join, which enables admins to maintain a single directory so that users need only one login to securely roam Windows settings and data across all their Windows 10 devices.

Myerson revealed a much-vaunted enterprise data protection feature for Windows 10, which partitions business and personal data from one another, is currently being tested and will be available soon.

While Microsoft's personal digital assistant Cortana will now be available in Australia as well as Japan, Canada and India, local users will miss out on some of its new features.

For example, US customers can use device pens to write phone numbers, email and physical addresses in Cortana Notebook, which will recognise them for reminders, event and move bookings and booking and tracking Uber cars. However, this will not be available in Australia.

The Edge web browser has been tuned up with better performance, with users now able to preview the contents of a tab and sync their favourites and reading list collections across devices.

Edge did not get support for browser extensions in threshold 2 however, despite users clamouring for the feature. Extensions for Edge are expected to appear next year in the 'redstone' update.

As signalled in October, Microsoft is pushing ahead with the deep integration of Skype into Windows 10.

Available as a consumer preview but not included in the release version, the Skype integration is limited to video calling and messaging from select Windows 10 programs such as the contacts app and phonebook.