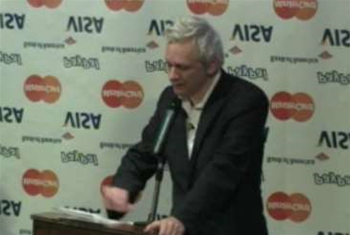 WikiLeaks spokesman Julian Assange has suspended the organisation’s publishing activities to focus on raising funds that he accused Visa, Mastercard and the Bank of America of choking off.

“This blockade is outside of any accountable process, it is without democratic oversight or transparency,” Assange told a press conference in London on Monday.

Assange said the financial blockade had cost the whistleblowing organisation tens of millions of dollars in lost donations, forcing it run on cash reserves for the past year.
WikiLeaks earlier this year filed a complaint with the European Union over the card networks' blockade.

Assange detailed an alleged conspiracy by the Bank of America to launch cyber attacks against WikiLeaks’ infrastructure through third party contractors, such as HB Gary.

In place of major card networks, WikiLeaks has turned to cheques and cash in the mail, mobile payments, traditional bank deposits, the cryptographic currency bitcoin, wire service Moneygram and Flattr.

Assange estimates that WikiLeaks needs $3.4 million to operate at the same capacity as it has in the past 12 months.
This is separate to funds being raised for Assange's fight against extradition to Sweden to face questioning over sexual assault allegations.

The organisation is also re-engineering its leaks submission system, which Assange said is untrustworthy following alleged attacks on its infrastructure by a person he would only identify as a former employee that was fired last August.
“As a result we have had to completely re-engineer, from scratch, a new generation submission system,” said Assange.

The new system will be launched on November 28 and will be “independent of all certificate authorities”, which Assange said are also untrustworthy.
Got a news tip for our journalists? Share it with us anonymously here.