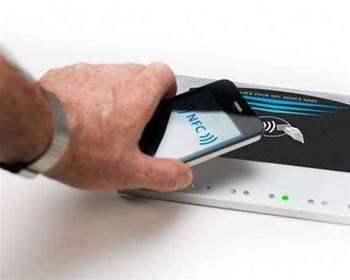 ANZ Bank was the last of the big four banks to market with a mobile wallet, but argues its slow and steady approach has resulted in a more secure and stable platform.

The bank first started working on mobile wallet technology in 2011.

It teamed up with Visa to trial a DeviceFidelity case for iPhones that incorporated a microSD card which hosted Visa's payWave contactless payment application connected to a prepaid ANZ account.

The solution allowed customers to make payments valued at less than $100 by swiping their phone against a payWave reader.

But the bank found customers weren't overly keen on the clunky case and would prefer instead to use near-field communications, which at the time was native only to Android phones.

Customers were able to make payments of up to $100, or more expensive purchases with PIN code authorisation.

In late 2014, the bank promised a mobile wallet solution would be available in early 2015.

It ditched carrier SIM cards to utilise the technology available in Android 4.4, which introduced host-based card emulation. The technology meant NFC payments could bypass a carrier's secure element to talk directly to an NFC reader.

But a solution failed to materialise, and in mid-2015 the bank admitted the launch had been set back to "ensure ... the solution meets the needs of our customers".

After many years of testing, the bank released its Mobile Pay digital wallet to its customers earlier this month.

According to ANZ's general manager of consumer digital Chris Venter, one of the biggest reasons the mobile wallet took longer than expected to arrive was because the bank struggled to find a tokenisation solution that could offer what ANZ wanted in terms of stability and security.

"When HCE was released on Android 4.4 in October 2013 there were not a lot of solutions in the market to handle the card management and secure elements," Venter told iTnews.

"While the tech in the phones was there [NFC chip capability], the tokenisation and the security aspects of being able to load a card and securely manage transactions was not mature enough at that point in time.

"We could have built our own, but we don’t want to be in the business of doing that, so we waited until we found some partners that had proven success with that technology."

ANZ watched as competitors went ahead with rival mobile wallet offerings, but Venter said the bank was not lured by sleeves and pay tag stickers or by being first to market.

"We rejected it as it was not customer-centric enough.

"It wasn’t a wait and see and learn from the other banks, we didn’t even consider them directly. We looked at the maturity of the overall market both locally and overseas.

"We took a more cautious approach to ensure that when we actually did release something to our customers it was of the highest quality."

It wasn't until 12 months ago that the bank found a software partner that could meet its requirements in regards to security and stability, and that could integrate well into both Android and ANZ's core banking platform.

"At this time we felt the proposition was ready," Venter said.

"We had done some piloting and enough customers trials and we knew there was enough interest, tap and pay was prevalent everywhere, and the PoS and ATM capabilities had grown to a point where there was enough critical mass.

"And the other part was the tech was secure enough and could provide us with the customer experience we were after." The bank declined to provide detail on its software partnerships.

It started developing its Mobile Pay solution around this time last year, and launched into a customer pilot in October 2015 to ensure its lab results would be mirrored in a real-world situation.

At the time ANZ went live with the solution earlier this month, it had 1000 users on the platform, Venter said.

ANZ's Mobile Pay is a standalone mobile application and can be used for Visa payWave credit and debit cards as well as American Express contactless credit cards.

A PIN is required for transactions over $100. Customers can also use the app to withdraw money at contactless-enabled ANZ ATMs.

The application does not offer features such as checking balances and transaction history; customers need to use the separate goMoney app for such functions.

Mobile Pay can run on all Android devices with version 4.4 of the operation system installed.