WA pours another $40m into Fiona Stanley Hospital IT 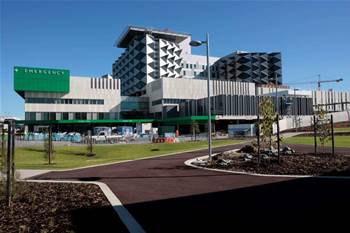 Embarks on its next hospital fit-out.

The West Australian government will spend an additional $40.1 million getting IT up to scratch in its new flagship Fiona Stanley Hospital before it opens its doors in October.

The controversial health facility is running six months late and $330 million over budget, primarily due to delays getting an overly ambitious IT infrastructure in place.

The new funding top-up roughly aligns with the estimates of Treasury chief Tim Marney, who told a parliamentary committee earlier this year that the cost of a renegotiated IT contract with hospital operator Serco to cover the six-month gap would likely fall between $25 million and $50 million.

The added investment comes on top of the $151 million Marney said the delays had already cost the state in terms of IT expenditure, thanks to "carelessly prepared" contracts governing the deals.

Budget papers released last week explain the money will “ensure a robust ICT platform at the FSH site” and enable the new facility to “better integrate with hospital and health services across the state”.

The state's taxpayers will be hoping that the Health Department has taken the lessons of Fiona Stanley on board as it now starts equipping yet another new facility, the Perth Children’s hospital.

Budget papers reveal that the IT component of the Children’s Hospital is funded to the tune of $188 million, with $21 million already spent and the remaining money spread out to 2017-18. The 298-bed facility will be built on the site of the old Queen Elizabeth II Medical Centre and is due to open in late 2015.

Despite Marney’s criticisms that the Fiona Stanley remediation was sucking funds out of other IT projects in the state, the government has committed to a handful of other big ticket items in the budget.

The health portfolio has pledged $29.4 million worth of new funds over four years to a new Laboratory Information System for testing group PathWest, which will replace the end of life technology it is currently running.

“This ICT investment will ensure the ongoing safety and quality of care and facilitate operational cost efficiencies including electronic document processing and improved sample tracking.”

WA’s announcement that it will invest another $45 million over four years into mobile network coverage in regional areas has already been welcomed by Canberra, as the Federal Government decides how to allocate its own $100 million towards fixing coverage blackspots.

“The announcement by the WA Government notes that there is an emphasis on improving mobile communications capability, and also a widening focus on higher-bandwidth fixed broadband services in regional areas,” Parliamentary Secretary for Communications Paul Fletcher said in a statement.

Budget papers also reveal that $25 million over four years has been set aside to pay for the WA Police’s new Computer Aided Dispatch system.