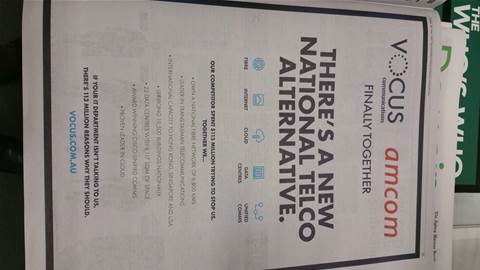 Amcom and Vocus have taken off the gloves following the failure of TPG’s battle to block the merger of the two companies into a $1.2 billion national telecommunications powerhouse.

The companies say there's now "113 million reasons" why a business' IT department should be talking to the newly-merged entity.

Once combined, Vocus and Amcom will own a 6800 kilometre long national fibre network, service 19,500 buildings nationally, boast 22 data centres and have international capacity to Hong Kong, Singapore and the US.

The companies agreed to merge last December, but TPG attempted to scuttle the deal by boosting its holding in Amcom to almost 20 percent.

Smart tactics led to Amcom and Vocus convincing more than 75 percent of Amcom shareholders to vote for the merger and TPG finally folded, leaving a Perth court free to rule in favour of the merger scheme earlier this week.

But while the battle to merge may be over, Vocus CIO Len Walter - who himselt was at Soul/TPG seven years ago - now faces the unenviable task of consolidating the two companies' systems.

However, it's not something that is new to him - he's been through eight merger/acquisitions during his time at the company, three of which doubled the business' size in one go.

"We’ve been dealing with integration priorities almost constantly since our first acquisition back in 2010 – at that stage we were still in startup mode with around 20 staff," he told iTnews.

"Given that we’re now around the 600 mark, the maturity of the IT organisation and systems has had to develop enormously. I’m expecting the increasing scale to both fund innovation and amplify the effect of our work.”

Vocus has its own small set of core systems as well as industry-specific platforms, but has inherited a "large and varied array" of different systems and approaches over its lifespan.

"The ongoing challenge is to consolidate those systems into ours without disrupting business activities, while also catering for organic growth," Walter said.

" .. whether in billing, analytics or other areas, as well as the transformative impact of big data in being able to keep plenty of our data forever, at lower cost," he said.

“Fundamentally, we’re aiming to build a major international telco based on the lightweight model of Silicon Valley rather than AT&T, and it’s been tremendously exciting to approach that from the ground up, with minimal legacy.”