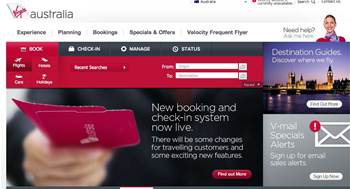 Virgin Australia appears to have come through a major systems migration relatively unscathed, handling new online and mobile check-ins on its new Sabre system first thing this morning, as forecast.

The airline pulled its booking and check-in systems offline at 11pm on January 1, 2013 while it switched from its Navitaire (domestic) and Amadeus (international) systems to a new Sabre system.

By 12.55am AEDT today, the airline's front page declared the "new booking and check-in system now live", with the ability to book flights, check in and manage existing books appearing to be functional.

"Things are running to plan and we have been checking-in customers since yesterday using the new Sabre system," a spokeswoman told iTnews.

The Velocity loyalty program website was reinstated about noon.

The live systems transplant came after long and detailed planning plus nine months of delays, but the airline's homework appears to have paid off.

Travellers reported delays of between two and five hours during check-in. The airline claims that four in five flights nonetheless landed at scheduled times.

The company attempted to warn its customers about the impacts of the project, issuing a press statement in the days prior, communicating on the #VAnewsystem hashtag, hiring more staff to handle check-ins and even offering free massages to frustrated customers stuck in queues.

The extra staff came in handy over the weekend - passengers took to social media to describe how two staff manned check-in desks to write handwritten boarding passes on some flights.

One iTnews reporter was on an international flight delayed two hours whilst staff waited for the printed manifest with the names of passengers was delivered to the aircraft.

Angry customers took to Facebook and Twitter to air their frustration, but the airline received as many compliments as complaints by passengers prepared for the worst and satisfied with the service.