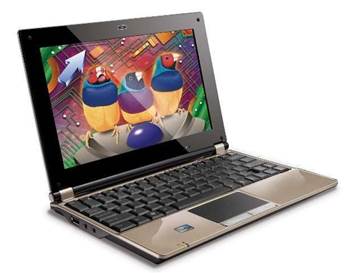 VNB100 and VNB101 have 25.4 centimetre screens but at different prices.

Viewsonic is expanding its product line beyond displays and diving into the burgeoning market for mini laptops, otherwise known as netbooks.

The VNB100 and VNB101 have portability and power in sleek, sturdy packages, Viewsonic said.

Unusually, the VNB100 has an ExpressCard slot for expansion, enabling devices such as 3G modems and TV cards to be fitted. It carries a suggested retail price of £299 ($A576).

Both have a 25.4 centimetre display, a five-in-one slot for multiple formats of Flash storage card and Windows XP Home Edition.

Got a news tip for our journalists? Share it with us anonymously here.
Copyright ©v3.co.uk
Tags:
10in160gb1gbatomhardwarenetworkingvnb100vnb101