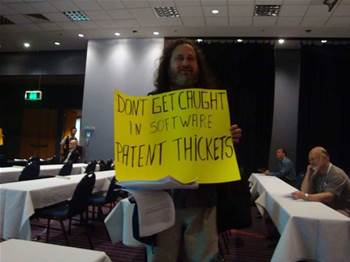 Armed with a placard that read "Don't get caught in software patent thickets", Stallman warned that the European Patent Office was campaigning in favour of software patents in Australia.

He briefly interrupted a presentation by European Patent Officer Ralf Abbing, who spoke about the "big issues in IP in relation to computing technology".

Stallman spoke with iTnews on the condition that the video be made available in a non-proprietary format.

Accordingly, the full interview may be downloaded in the free, open standard OGG format here (38Mb).