Vic Premier promises $30m in IT grants for manufacturers 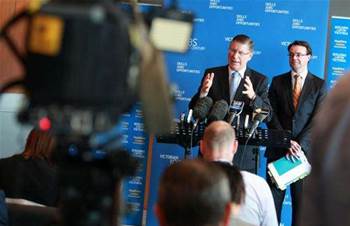 Victorian Premier Denis Napthine has promised the state’s ailing manufacturing industry $30 million worth of grants to help it buy up new tech and leverage high-speed broadband, but only if the Coalition wins the November election.

The ‘manufacturing and innovation technology fund’ is just one arm of what the government has touted as a $33 billion plan to create 200,000 jobs in the state.

“This fund will be available to growing manufacturers to assist them with sourcing ICT services,”  Napthine said in a statement.

"We will also continue to provide additional investment to support projects that develop new ways of using high capacity broadband to grow jobs and investment in Victoria.”

The push to kit out the manufacturing sector follows news that Holden, Toyota and Ford will all shut Victorian plants and pull car-building out of Australia between 2016 and 2017.

The Victorian Government has been driving hard to promote the state as a centre for high tech jobs, a campaign it claims has generated $1.1 billion worth of new investment and 5000 new jobs since it took over government in late 2010.

The Government’s jobs plan has also promised another $174 million to expand that state’s manufacturing base into “high-end and knowledge intensive sectors” particularly nano-technology and robotics.

But the state premier and treasurer have been grilled over how much of the funding is new, and how much is tied up in previously announced policies. It is understood that the massive price tag for the strategy includes the value of job-creating infrastructure projects like the airport rail link.

The Coalition’s appeal to voters comes just one day after Labor introduced its own jobs strategy.

Leader Daniel Andrews did not specify any money for the tech industry in particular, but did unveil a $200 million ‘future industries fund’ which will hand out grants of up to $1 million to businesses in six ‘high growth sectors’ including medical technology, new energy technology and professional services.

Grants will require a reciprocal investment from recipients.

Is innovation still alive and well in the Australian manufacturing industry? We’re keen to hear your opinion.