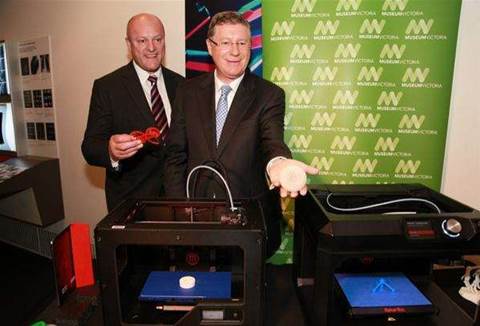 Victorian Premier Denis Napthine has promised to spend $2.2 million to buy every secondary school in the state a 3D printer if his government wins the November state election.

“The Coalition Government will fund up to $3750 to purchase single model printers and the associated consumables for up to 316 secondary and P-12 schools, plus 75 special schools with secondary students, across the state if re-elected," he said this morning.

The initiative is designed to “nurture student creativity and scientific endeavour and help to create the next generation of cutting edge scientists, designers and manufacturers,” Napthine said.

The government confirmed the grants are designed to cover software, materials and teacher training, as well as the devices themselves.

Many Victorian schools, however, will already be familiar with the technology.

Government-funded science and innovation centre, Quantum Victoria, has been running training days with teachers and students to introduce them to the gadgets since 2013.

The UK government similarly highlighted the importance of training teachers on the new technology following a small-scale trial conducted across 21 schools in 2013.

"Schools reported that early work with the printer was often a trial and error process and limited to demonstrations and printing of small files such as 3D shapes. More effective and informed use to deliver the curriculum developed over a period of time," the UK education department reported.

"The project highlighted the need for good quality upfront training of teachers when introducing new technologies including teaching approaches, and sufficient non-contact time to plan the most effective use of the printers”.

The $3750 cap the Victorian Coalition will impose means that schools will need to find these training resources from with the grants they are given.

Victoria is the first Australian state to have raised the prospect of such a rollout, and analysts say that 3D printing in education is still in its infancy.

In a report issued today, analyst firm Gartner forecast that the number of 3D printers shipping worldwide will more than double in 2015 to 217,350 - a trend it expects to continue into the foreseeable future.

Despite this, analyst and report author Peter Basiliere believes the technology has yet to make a huge impact on schooling.

“While classroom 3D printing is for the enthusiastic teachers who have the drive to try it out, it is far from changing the curriculum in any significant way," he wrote.

“While classroom use will drive a small number of purchases in secondary schools, postsecondary institutions are most likely to invest in the near term."