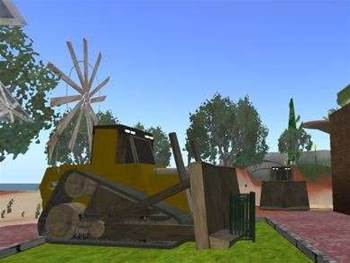 The virtual bulldozers have moved in on Melbourne Laneways on Second Life’s ABC Island, after Multimedia Victoria said it would not renew the lease.

The research project was launched in October 2007 to test the ‘potential impact [of virtual worlds] on the economic and social lives of Victorians’.

It was designed to capture ‘the quintessential characteristics of Melbourne, such as cafes in hidden laneways and Federation Square’, Multimedia Victoria said at the time of launch.

But 10 months on, the government has decided it will not renew the lease on the Melbourne Laneways pilot – officially closing the site in-world yesterday.

“The Melbourne Laneways pilot project finished on Second Life yesterday following a successful project and an evaluation that determined no ongoing need for the presence at this time,” a Multimedia Victoria spokesperson told iTnews.

“Consumer generated media will also continue to be monitored by the Victorian Government, as the government is keen to keep up-to-date with emerging technologies that may impact on the economic and social lives of Victorians,” the spokesperson said.

Aussie Second Life blog, the Metaverse Journal, said in a post that the project ‘will be missed’.

“It will also provide an unfortunate perception that Second Life is continuing to dwindle as a desirable virtual world location,” the journal wrote earlier this week, as news of the impending closure became known.

A poster identified as an ‘ABC admin’, Wolfie Rankin, claimed that ‘only a few people are sad to see the Laneways go, as it was a really laggy area.’

“Yet I found that if I sat there for a while, people would gather and chat, so perhaps a place for conversation would be good,” commented Rankin.

“What will become of the space is anyones [sic] guess.”

No plans have been announced for the re-development of the site on ABC Island.
Got a news tip for our journalists? Share it with us anonymously here.