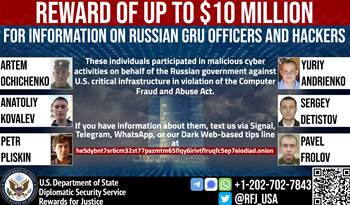 The United States government said it will pay up to US$10 million (A$14 million) for information on seven Russian military intelligence agency officers, alleged to be behind attacks on critical infrastructure in America.

Alleged crimes committed by these six Russians include spear phishing campaigns against US targets, unleashing destructive malware, and unauthorised access to computer networks.

They are officers of the Main Directorate of the General Staff of the Armed Forces of the Russian Federation or GRU, the US said.

Pilskin, Andrienko and Frolov are accused of developing components of the devastating NotPetya malware that spread around the world mid-2017, causing loss of data, disruption and billions of dollars worth of damage.

Kovalev is alleged to have used spearphishing as part of Russia's campaign to subvert the 2016 US elections.

A seventh intelligence officer, Marat Tyukov, is accused by the US Department of Justice of being a member of Russia's internal intelligence agency FSB and its Unit 71330.

Tyukov is alleged to have targed more than 380 overseas energy sector companies in 135 countries, to obtain persistence in their networks for future sabotage operations by Russia.

Information about the above can be submitted to the US Rewards for Justice programme through the The Onion Router (TOR) anonymising network.