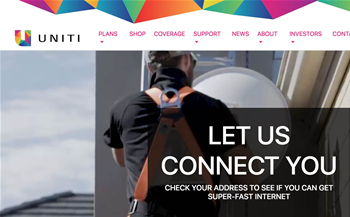 Set to expand reach of its 'NBN alternative' services.

South Australia’s Uniti Wireless has made its listing debut, raising approximately $13.2 million in an initial public offering and appearing on the ASX.

The company, which provides fixed wireless services as well as resold NBN services, had been aiming to raise between $12 million and $18 million in the IPO, which it announced in late December.

Like other wireless internet service providers (WISPs), Uniti markets its own services as an “alternative to the NBN”.

In a letter to shareholders today [pdf], Uniti said it had plans to expand the reach of its own fixed wireless services “beyond the Adelaide and Melbourne markets where [they] currently exist.”

This will occur primarily by taking advantage of “non NBN fibre” network access through another business it has acquired and is in the process of merging with, FuzeNet.

FuzeNet was “a reseller of third party fibre access networks that [were] constructed as an alternative to the NBN”.

“Post the merger, [Uniti] will have access to a larger number of sites where non NBN fibre has been deployed,” it said, noting these sites could then support Uniti’s own wireless infrastructure.

Uniti said it would still be an NBN retail service provider in areas where it did not have its own network infrastructure, however it’s focus would still primarily be in “alternative networks”.

Uniti Wireless offers residential, business and enterprise services on speed tiers similar to those of the NBN.

The company’s CEO, Michael Simmons, was previously group CEP and enterprise, wholesale and government lead at Vocus, and also had a long career at TPG.

Shares in Uniti Wireless were trading at $0.24 at the time of publication, just below the $0.25 prospectus price.