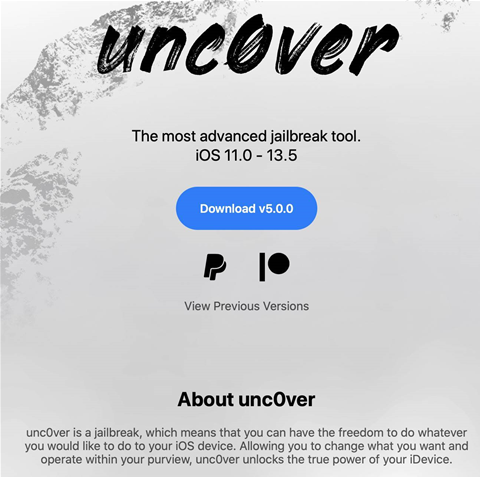 A team of hackers have released a so-called jailbreak that bypasses Apple's strict security and application restrictions on all current versions of its iOS mobile operating system, including the latest 13.5 released last week.

The unc0ver version 5.0.0 jailbreak is said to work across all devices running iOS, including Apple TV, using a zero-day vulnerability in the Darwin XNU kernel that controls the hardware on iDevices.

Unc0ver allows for the installation of software outside Apple's App Store, and elevated superuser privileges across the operating system.

While said to be legal, jailbreaking devices and installing software from alternative app stores can carry severe security risks.

The code used for the jailbreak and apps in alternative app stores has not been vetted by Apple but the unc0ver team claims existing security layers on iOS are preserved and not removed.

This, the unc0ver team claimed, protects users' personal information, allowing them to run their favourite jailbreak apps without being exposed to attacks.

Apple iOS services such as iCloud, iMessage, FaceTime, and Pay will continue to work after jailbreaking, the unc0ver team said.

The jailbreak will also survive software updates, and persists between device restarts.

Nevertheless, the unc0ver team cautioned against installing an iOS update from Apple that's specifically designed to address the vulnerability used for the jailbreak, as this would bring the device back to a restricted state.

The updated unc0ver jailbreak tool is free and requires tethering with a USB cable and additional software to install under Apple macOS or Microsoft Windows.

It is also possible to jailbreak devices with a Linux distribution but that method requires an Apple developer account.

Unc0ver can also be installed directly under iOS, but this requires the devices to have been jailbroken previously.