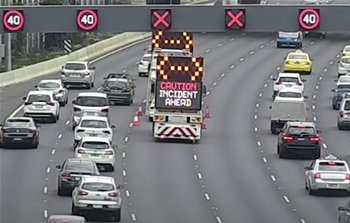 Transurban is using insights from its analysis of motorists’ compliance with ‘Red X’ lane closures on toll roads to inform a change to the learner’s permit handbook published in Victoria.

It is one of a growing range of successful examples of data analytics use at the ASX 15 company, underscoring a multi-year effort to build internal capability and systems around analytics and data use.

This, and other examples - including a growing number of digital twins - are explored in this week’s episode of The iTnews Podcast.

A 'Red X' is displayed on gantries above lanes to indicate that the lane is closed due to a hazard ahead, such as a broken down vehicle and the presence of incident response crews on the roadway.

As a 2019 instructional video shows, cars must switch out of an affected lane when they see the 'Red X'; the video also notes that “it’s illegal to ignore the overhead signs”.

Transurban uses what it calls automatic incident detectors (AIDs) - essentially purpose-built cameras - to identify obstructions in a lane, which immediately alerts the traffic control room operators to “close” the lane by placing a 'Red X' above it well in advance of the obstruction to give drivers enough notice of the problem ahead.

It also makes use of data collected from sensors embedded at 500m intervals in the road surface.

“We do a lot of analysis on how compliant are people to those closed lanes,” Spence said.

“We can do video analytics on those, count cars and the types of cars that are driving through closed lanes.

“This is not for enforcement or anything like that - this is more from a safety perspective from our own staff and for our customers driving on our roads.

“We try to work on strategies such as how many gantries before an incident we should be closing that lane to ensure that people have enough time to move out of those dangerous lanes.”

While even the 2019 video shows instances of non-compliance - leaving a lane change until the last minute - Spence said the company’s data-led efforts had shown that some drivers simply did not understand the warning system.

“We discovered that people aren't following the rules because they often don't even know what that means” or don’t understand the risks and dangers of driving through a closed lane Spence said.

"We are currently working with the Department of Transport for Victoria to enhance the learner's handbook/manual to better explain to drivers what a 'Red X' means and how lane usage signs work to better educate drivers and improve driver behaviour."

Spence said it is one of a growing number of examples of actionable insights being drawn from Transurban’s data-led efforts.

Spence started at Transurban five-and-a-half years ago, initially as a consultant on the tail-end of a project building the foundations of an analytics platform.

The company, like many, had traditionally used Excel for data analysis but had run into limitations, particularly its usefulness in a real-time business like Transurban, where the main analysis challenges are around “road safety or optimising traffic flow.”

Transurban has access to a large amount of data held in a mix of siloed systems such as tolling and CRM, as well as road sensors that count cars and provide average speeds over 30-second periods.

“You can imagine how much data these sensors generate,” Spence said.

“You can also imagine with all of these sensors in our roads, without having a big data type of platform and some cool technology to use that data, we could get like half a day's worth of transactions into Excel, and that's how you knew what congestion was like on a particular section of road.”

In Excel’s place, Transurban stood up a data infrastructure powered by AWS services - including S3 and Redshift - and overlaid with Tableau for visualisation, dashboards and reporting. It uses Python to ingest raw operational data into the cloud-based data infrastructure.

Spence, and a data engineer, were brought on full-time after the initial project expired and spent the next three years and beyond refining the infrastructure, creating a data culture, and encouraging greater and more advanced use of data by different parts of the business.

The Tableau environment - which is essentially the business-facing UI for data - has about 200 Tableau Desktop users - analysts - and a further 900-plus data consumers.

That means about half of all employees at Transurban are Tableau - data - users.

“So in five years, I always tell people that we've had enterprise adoption of data and analytics at Transurban,” Spence said.

Parts of the business, such as traffic modellers, had embraced the new infrastructure early.

“It was pretty easy to wow people effectively when you can ingest billions and billions of rows of sensor data into a platform, throw Tableau over the top, and give year-on-year trends on traffic congestion on a particular section of road,” Spence said.

With an internal centre of excellence structure, regular training sessions and external support, Spence hopes to drive a greater degree of sophistication into the organisation’s data culture.

“I still think we probably [focus] too much on report writing and dashboard building, which are good - management do certainly need answers to known questions - but we're trying to encourage people to be analysts more,” Spence said.

That also mirrored Tableau’s product trajectory, he noted, with newer features aimed at “encouraging our analysts to be inquisitive and find answers to questions they hadn't thought of.”

“I run a community of practice for Tableau and as part of that, every six weeks, I bring most of those 200 [analysts] together and we talk about different techniques and different features of the tool.

“I always get someone within one of the business units to also showcase something that they've built.

“So it's built a really good community of analysts, and not just for the product Tableau, but just the whole art of being an analyst.”

Increasingly, Transurban’s data work is leading it down the path of digital twins - working virtual replicas of physical assets that can be used to test out different scenarios that could have major real-world benefits.

One of the company’s digital twins was built for the Burnley Tunnel, the first road tunnel built in Melbourne and a founding project road for Transurban. Engineering consultancy SMEC and virtual reality developer Snobal partnered with Transurban on the project.

“The Burnley tunnel goes down a hill and then two-thirds of the way through the tunnel it's quite steep, it turns and comes back up,” Spence said.

“The challenge we have is that cars are going fine down the hill but as soon as they hit the steep bit coming up, they're slow to get back on the accelerator, and that builds up congestion.

“It sounds like a strange problem - we want cars to go faster. But this was a really interesting challenge.”

Spence said the company effectively built a digital twin of the tunnel. It then paid people to “sit in a virtual reality rig” and drive the tunnel in unaltered conditions and then in altered - “enhanced” - conditions.

“We had a library of enhancements we could make, and the best thing about this is - and this is where Tableau was useful and getting quick insights was important - if some of those enhancements didn't work, we could tweak different things and try something else, so we made virtual changes to that tunnel,” Spence said.

“An example of one of the changes is we have these what are called pacing lights on the side of the tunnel that go at the speed limit.

“While you're driving, you kind of feel as though you have to keep up with those lights. And so if we keep those lights at the speed limit, people don't like those lights going faster than them so they try to keep up and maintain a consistent speed.

“We did this and it was really interesting. We got a whole bunch of really cool data.

“But what I really love about analytics, as opposed to just building standard reports and dashboards, is we got insights out of that that we hadn't planned. We were getting answers to questions we hadn't thought of.

“An example of that is the focal distance of people driving in the virtual reality rig. On average, people were focusing around 30 meters ahead of them.

“In the enhanced environment, they were focusing 43 meters ahead of them and that's a big safety measure.

“The further ahead you look, the more aware you are of what's going on ahead, and the more easily you can react to changes ahead. So that was a good insight.

“And so cars did drive slightly faster and still at the speed limit, which was great, but we got other safety benefits out of that as well.”

More digital twins are now being built out, including for the Airport Link Tunnel in Brisbane, where it is being used to tweak the settings of the tunnel ventilation system to reduce electricity consumption while staying within environmental limits.

Spence said that model is likely to be deployed to other tunnels, given the benefits it has achieved in the one location so far.

He also said that digital twins would likely become part of the delivery of future road projects, given the utility of the technology for scenario planning and operational efficiency purposes.