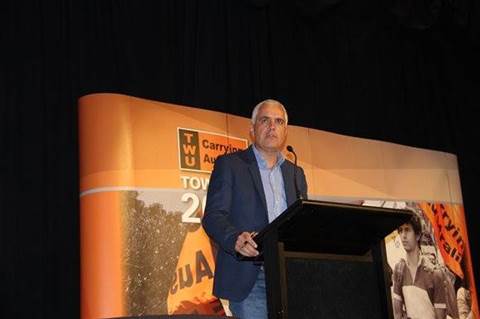 Gloves off after Labor election loss.

In a fiery speech delivered in the wake of Labor’s badly failed election campaign, TWU secretary Michael Kaine has said it was now time for the union to “unleash its full potential and demonstrate our power” through an “ambitious plan to reshape our industries.”

Put simply, that means strikes, as the union pursues the removal of gig economy distribution models and the embedding of what it calls ‘Safe Rates’. Australian enterprise customers of tech platforms like Uber and Amazon are square in the crosshairs.

No such thing as a free ride

Traditional logistics firms are fed up with the race to the bottom too.

Kaine’s speech neatly coincided with the chief executive of logistics giant Toll Group, Michael Byrne warning in the Australian Financial Review plummeting delivery fees for online sales are “stretching supply chains to the limit” and accusing consumers of demanding instant gratification without paying for it.

The threat of the TWU getting stuck into online retail supply chains is a potent one because truckies, freight and logistics workers remain one of the most industrialised sectors in the economy spanning across road, rail, ports and air.

The TWU’s last major bargaining dust-up with Qantas over conditions and costs in 2011 literally stopped the nation after the airline stunned passengers and the government by grounding its entire fleet after it locked-out unionised staff involved in industrial action.

The TWU’s former boss Tony Sheldon, who is now set to enter the Senate, is set to be the only member of federal parliament not invited to join the airline’s Chairman’s Lounge, an offer he has said he would reject even if it was put forward.

On Tuesday Sheldon’s successor Kaine slammed the TWU’s action plan targeting what the union says are increasingly Dickensian conditions in the online economy down on the table, giving Labor politicians a whack in the process.

“If we had been banking on a Labor victory to somehow deliver wins to transport workers then we would have been fools,” Kaine said before taking the cudgels up to what many in the logistics industry refer to as the ‘scab economy’ – gig workers without set wages or conditions now being primed deliver almost anything.

“Technological innovation is being misused to strip power and income away from working people,” Kaine boomed warning that Amazon and Uber were now “cheerleaders for turning back the clocks on our rights.”

“Amazon has directly entered the transport industry and it’s already pushing down standards.”

Kaine said that Amazon’s $US500m investment in Deliveroo was a new threat to the transport industry because it took a stake in a company “renowned for misclassifying drivers and wage theft, forcing riders to work shifts where they get no money at all.”

The TWU’s biggest beef with gig distribution companies like Uber, Amazon, Deliveroo and Foodora is that they compromise the safety of their workers as well as operating essentially illegal employment models that prey on the vulnerable, like overseas students.

The TWU recently won a landmark legal case that found it had illegally claimed its employees were contractors when they had the same obligations as employees with none of the conditions or benefits, securing back pay in the process.

“Every day other gig economy companies still underpay their workers, rip them off their super and refuse to support and compensate them when they are injured or beaten on the job. We have to be ruthless in insisting that our rights will not be auctioned away to fuel the profits of Silicon Valley. To do this we must double down on the plans we’ve put in place over the last five years.”

“Today we deliver a warning shot: transport workers will demand sector-wide rates from wealthy companies at the top of the transport supply chain, the point of economic power,” Kaine said.

“And yes we will strike to achieve our aims. We will not let the major airports or retailers like Aldi squirm out of their obligation. Those at the top of the supply chain will be held accountable – politically, morally, economically.”