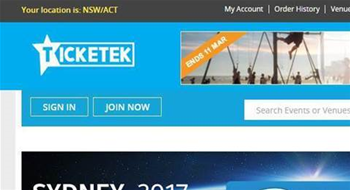 Hunt for CTO as ticketing and technology divisions merge.

Ticketek parent TEG has revealed a company-wide restructure that will merge its ticketing and technology operations under a single banner to better meet the expectations of customers.

The changes will bring together the staff from across the company’s ticketing, technology, client services, e-commerce, marketing and product innovation teams into a single stream.

In a statement, TEG CEO Geoff Jones said the restructure would allow TEG to strengthen its "focus on innovative, agile, ticketing and technology solutions that deliver better experiences for fans and enhanced capabilities for our clients”.

“This restructure will ensure TEG becomes even more dynamic in an environment where the Live Economy is experiencing rapid changes in the way customers want to search for, buy and redeem tickets,” he said.

The restructure will also see the appointment of a new chief technology officer to replace former CTO Matt Cudworth, who departed for DXC Technology last November.

TEG said it was currently in the process of filling the role, as well as the new role of general manger of Ticketek Australia, both of which will report to Hoy.

The new single stream will be headed up Cameron Hoy, who has been promoted from his current positon as Ticketek Australia’s managing director to the new role of chief operating officer and head of ticketing for TEG.

Hoy said the new structure would “unleash even more potential for innovation for fans, clients and partners”.

“We have seen more change in the past three years than the previous 30 and ticketing has expanded its importance in the value chain of the Live Economy. TEG is leading that change,” he said.

“I am proud that TEG, through Ticketek, is the only major ticketing operation in South-East Asia that has a local, dedicated and highly sophisticated technology development team.”