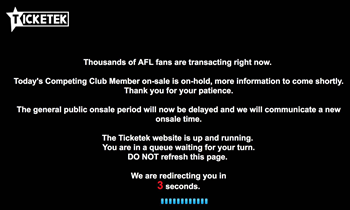 Ticketek has blamed misconfigured load balancing for a major meltdown of its online systems on Tuesday that left AFL fans unable to purchase finals tickets.

The company is being forced to re-run the planned first release of tickets to games at the MCG and SCG on Wednesday morning, with staggered releases for others hoping to secure entry to the games.

Ticketek offered to “waive transaction fees” - which amount to $7.25 - on all week one finals ticket purchases as an apology to football fans.

In a statement, Ticketek said that “the issue was caused by an operator error in the website traffic load balancing settings”.

The error immediately caused massive problems for fans of teams that are competing in the week one finals; they are able to buy tickets 24 hours earlier than AFL members and the general public.

By lunchtime Tuesday, AFL clubs were reporting that Ticketek had elected to “shut down” its systems while it tried to get them working properly.

The AFL also later confirmed that ticket sales had been put “on hold” to allow Ticketek to try to “rectify” its systems, though it became clear through the afternoon that they could not easily be fixed.

AFL clubs involved in the week one finals games carried a statement from the AFL on their websites late Tuesday noting that there had been “a significant issue with the Ticketek system”.

“The AFL are extremely disappointed in the experience a large number of our club members were presented with when trying to purchase their tickets today,” the governing body said.

“We share in our club members frustration and are working with the venues (MCG and SCG) and their provider (Ticketek) for a full explanation.”

Some AFL fans were able to get tickets allocated despite the website issues. However, many were confused on Tuesday night as to whether or not they would have to pay the transaction fees, given other customers did not.

Some fans took to the AFL clubs’ social channels to implore them to pressure venues to put Ticketek on notice after the failure.

The AFL has published a revised schedule of ticket releases, with sales also staggered evenly across two days.

Ticketek said the site was "up and running" again by Tuesday night, though users seeking AFL information were still displayed an endlessly-looping landing page at the time of publication.