The big winners from Defence’s back-office IT refresh 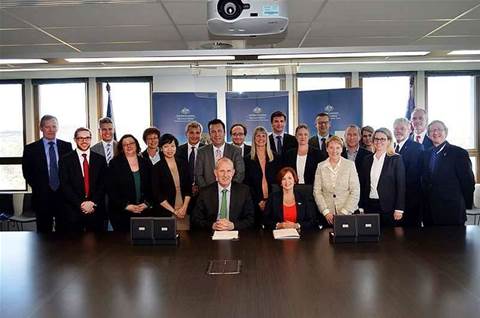 Several Australian IT companies stand to finance major expansions as part of the $800 million centralised processing contract formally signed between Defence and Lockheed Martin this week.

The band of subcontractors Lockheed Martin has put together paints a picture of a far more nimble IT architecture for Defence once the data centre consolidation is complete.

The list of subcontractors suggests that Defence will remediate a significant number of mid-range applications onto a virtualised x86 platform (Vmware on Dell/Cisco).

It also suggests that these applications will primarily be hosted in production facilities in Canberra and Sydney, as well as between six and ten distributed facilities that will remain at major Defence installations around the country after being whittled down from the 280+ computer rooms the department started with.

A Defence spokesperson told iTnews that the most critical applications will operate on an active-active basis between two major production data centres.

"Where necessary - and supported by an application's architecture - the core data centres will be capable of sharing compute load across the sites," the spokesman said.

Greg Boorer, managing director of Canberra Data Centres confirmed that his firm will supply data centre space but also some facilities management services from both its two Canberra facilities and a range of facilities spread around Australia.

“This confirms and validates all the risks we took to establish the business,” he said. “It also validates the unique model we developed to provide a more customised, secure and future-proof solution for public sector customers.”

Boorer said his firm would be on the hunt for more data centre technicians to aid the expansion of this model onto the national stage.

“It’s a logical extension of us providing the world’s best practice data centre management in Canberra, spreading it out on an as-a-service basis to Lockheed Martin,” he said.

Mike Barbar, executive director of IT solutions at NEC, said that while the company already has skills available in Canberra as a result of its subcontracting to Lockheed Martin’s work at the Australian Tax Office, the company will also be on the lookout for additional staff in the ACT.

Barbar said NEC wasn’t intimidated by the breadth of Defence’s IT legacy the company would soon be running.

Update 6:00pm: The original text of this story read that Dell will provide server hardware, when it is actually providing data centre migration services. The story has also been updated to reflect the change management role to be undertaken by Deloitte.