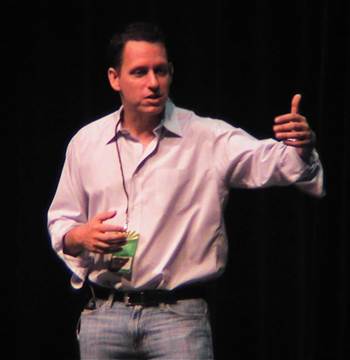 The carrier aiming to build the second main fibre-optic cable linking Australia, New Zealand and the US yesterday said it raised over $NZ5.5 million ($A4.24 million) in a fourth round of funding.

Pacific Fibre, which was announced last March, counted among its investors PayPal founder Peter Thiel (pictured), an early Facebook investor who still owns 5.2 percent of the social media service and whose personal worth was estimated to be $US2.58 billion ($2.62 billion).

But he declined to reveal how much Thiel put into the venture or how much was raised: "Obviously, not enough, yet".

"We'll have a big capital raising round in the next two quarters," Rushworth said.

Pacific Fibre will talk to institutional investors such as superannuation funds.

In July, wholesale ISP Pacnet stumped up to jointly fund the project and shave $300 million off its building costs.

The venture faces competition from entrenched rival Southern Cross, which provides 620 gigabits a second but which is planned to swell to 3.6 terabits a second, the 10-year-old carrier says on its website.

Thiel's backing will raise US money, says Rushworth who estimated that $US300 million to $400 million was needed to break ground by the middle of 2013 when it expected to hit capacity of 5 terabits a second.

Rushworth said the New Zealand Trade and Enterprise government agency approved funding of up to $NZ250,000 for feasibility studies.