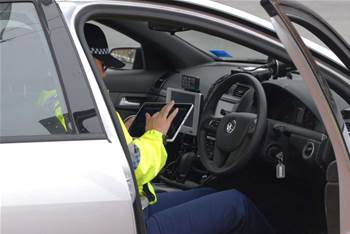 Tasmania Police will save 20 hours of paperwork a day and $250,000 every year once the roll out of an internally-developed application allowing cops to issue infringement notices from their new Windows 8 tablets is complete.

The application allows officers to issue notices of traffic, liquor and fisheries offences, among others, on the spot without the need for a paper ticket.

It automatically inputs the appropriate penalty for the infringement and allows police to add photos and notes to the record.

The data is then sent through to the Fines Infringement Notice Database (FIND), which is managed by the state’s Department of Justice.

PINS also interacts with the state’s motor registry system (MRS) to pull relevant registration and license details, as well as the intrepid central inquiry system (ICE), which is a centralised search tool linking all relevant databases.

The mobile application means police officers will no longer need to travel back to the station to manually copy over the details of a paper infringement notice - of which it issues around 90,000 a year - into the FIND system.

The PINS application is being deployed onto the tablets from today, beginning with traffic and marine commands in the Southern District. The force expects the statewide rollout of the app to be complete by the end of August.

Tasmania Police populated three years worth of data - currently around 437,362 records - from the FIND system into the new PINS database over the back half of last week, project manager Sergeant Ian Mathewson told iTnews.

The data will reside in the new PINS database for three years, the same amount of time that Tasmanian citizens are eligible for a caution if their infringement record remains clean.

However the force has not been able to do away with paper entirely.

Unlike its NSW peers - who have just trialled a similar app that allows infringement notices to be immediately issued by SMS or email - Tasmania Police will be forced to mail paper notices to fined offenders for at least a little while longer, due to current legislative barriers.

The force is campaigning to change relevant laws, however, and is currently in talks with the Justice department to enact similar legislative changes that would enable police to issue notices by email and SMS, Mathewson said.