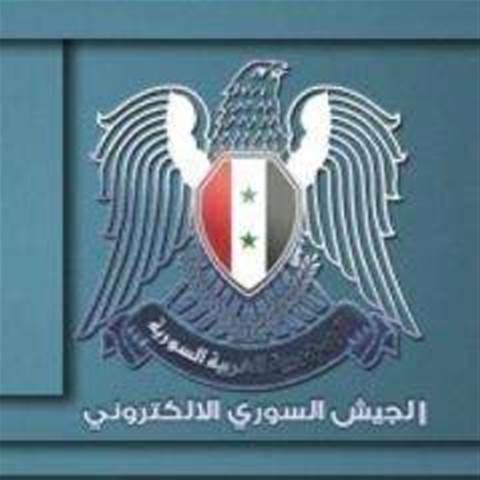 Logo of the Syrian Electronic Army.

News organisation the Guardian is the latest Western media organisation to have its Twitter accounts compromised by Syrian hackers.

Over the weekend, the so-called Syrian Electronic Army or SEA managed to hijack eleven accounts associated with the Guardian, such as as its books, films and travel Twitter feeds, the news organisation reported.

The SEA claimed it was behind the Twitter account attacks, as it aims to spread propaganda for the civil war riven country's dictator Bashar al-Assad.

Others accounts were also hacked by the SEA, according to security vendor Sophos, which posted a screen shot of the Guardian's Business newsdesk Twitter feed sending out a bogus Tweet. 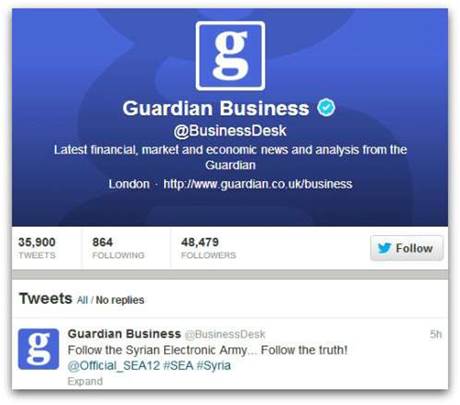 Its journalists were targeted with an email phishing attack with links that asked users for their Twitter account details, the Guardian said, as the SEA accuses news site of spreading "lies and slander about Syria".

The news organisation's journalists have reported on the brutal civil war in Syria, and speculate that the Guardian was targeted by the SEA for this. According to the Guardian, the SEA is funded by al-Assad's cousin Rami Makhlouf who pays hackers US$500 to $1,000 per succesful attack.

While some of the Guardian's Twitter accounts remain suspended, others have been restored.

The SEA claimed responsibility for last week's hack of the Associated Press Twitter accounts, which was used to send out a false tweet about the White House being bombed and US president Barack Obama being injured.

Reuters reported the false tweet sent financial markets into a tailspin for roughly three minutes, wiping out billions of dollars of value in the progress.

Several other Western media have been attacked by the SEA which focuses on Twitter. These include al-Jazeera, the BBC, Reuters, NPR, and CBC.