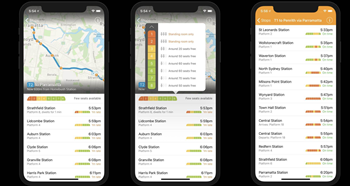 NextThere's implementation of the train data.

A subset of passengers on Sydney’s rail network can now see how full an approaching train is courtesy of data being collected by Sydney Trains.

The data is being surfaced in the transportnsw.info Trip Planner as well as in travel apps including TripView, NextThere, Anytrip, TripGo and Transport for NSW’s own Opal travel app.

App maker NextThere said in a Medium post that occupancy is calculated by carriage weight data which is being collected and surfaced to transport app developers.

It said that under each axle of the newer Waratah trains, there “is an airbag with an air pressure meter attached ”.

“The psi [pounds per square inch] reading translates to the kilogram weight of the carriage,” NextThere said.

“As the doors close at each platform, the carriage weights are recorded and sent over 3G.

“The carriage weights get through to the app around 10–20 seconds later and we feed it through [an] algorithm to project seat availability.”

However, the NSW government said in a statement that the data would make "600,000 customer trips a day" easier for commuters.

NextThere said that Sydney Trains and Transport for NSW had “been quietly working with us behind the scenes for some time now” to make real-time estimates of carriage crowds possible.

The app developer said some “trial and error” had been involved in working out the average weight of a Sydney commuter, which was important for the algorithm to determine approximately how many people were in a carriage.

The app is able to predict approximately how many seats are free in the train’s eight carriages, and it updates this along the journey.

The crowd estimates were well-received by commuters, who shared screenshots of the technology in action via social media on Wednesday morning.