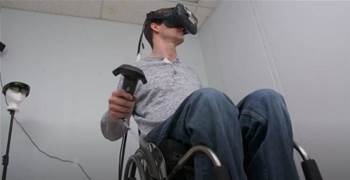 Researchers at the Neuroscience Research Australia’s (NeuRA) Spinal Cord Injury Research Centre are set to trial virtual reality as a treatment for sensation loss in people with paraplegia.

The RESTORE project was granted $2.5 million by NSW Health to develop and test an immersive VR interface that enhances surviving nerve connections in an effort to help people regain their sense of touch.

Led by neuroscientist and psychologist Sylvia Gustin, the project builds on her work at NeuRA that revealed 50 percent of individuals with paraplegia as a result of complete spinal cord injury still have surviving nerve fibres capable of transmitting sensation from the lower extremities to the brain.

Contrary to previous understanding, the brains of people with these ‘discomplete’ spinal cord injuries still receive these messages but they are too faint to process, Gustin said in a NeuRA presentation.

Virtual reality will be used to simulate the experience of walking in people with discomplete injuries, while researchers apply stimuli to their feet.

It’s hoped the combination of visual and tactile stimuli will be able to help re-train the brain to identify the weak, distorted signals from the toes as touch.

More complex simulations could involve other virtual scenarios, such as walking up to a ball and kicking it.

“It’s very exciting that we can explore how virtual reality can be used to help people regain feeling in their limbs,” Gustin said in a statement.

“The outcomes of our research could lead to a cultural and scientific shift in terms of how we treat people with spinal cord injuries, and what they can expect from life after experiencing such a devastating injury.”

The researchers also hope the project will uncover brain mechanisms that could be directly targeted in the future rehabilitation methods, including efforts to preserve, rather than restore, touch perception immediately following spinal cord injuries.

An estimated 12,000 Australians suffer from spinal cord injuries, with around 350 suffering injuries each year.