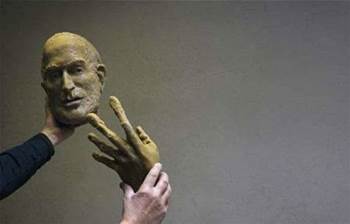 Hungarian sculptor Erno Toth holds up a face and a hand of a wax model for a new bronze statue of late Apple co-founder Steve Jobs in Budapest November 18, 2011. Credit: Reuters/Laszlo Balogh/Files

Apple co-founder Steve Jobs threatened to file a patent lawsuit against Palm if that company's chief executive didn't agree to refrain from poaching Apple employees, according to a court filing made public on Tuesday.

The communication from Jobs surfaced in a civil lawsuit brought by five tech workers against Apple, Google, Intel and others, alleging an illegal conspiracy to eliminate competition for each other's employees and drive down wages.

The defendant tech companies have attempted to keep a range of documents secret.

However, US District Judge Lucy Koh in San Jose, California rejected parts of that request, which led to details of Jobs' 2007 communications with then-Palm chief executive Edward Colligan becoming part of the public record.

Jobs proposed eliminating competition between the two companies for talent, according to a sworn statement from Colligan cited by the plaintiffs.

"Mr. Jobs also suggested that if Palm did not agree to such an arrangement, Palm could face lawsuits alleging infringement of Apple's many patents," Colligan said in the statement.

An Apple representative could not immediately be reached for comment on Tuesday. A spokesman for HP, which acquired Palm, also could not be reached.

Colligan told Jobs that the plan was "likely illegal," and that Palm was not "intimidated" by the threat.

"If you choose the litigation route, we can respond with our own claims based on patent assets, but I don't think litigation is the answer," he said.

In 2010, Google, Apple, Adobe Systems, Intel, Intuit and Walt Disney's Pixar unit agreed to a settlement of a US Justice Department probe that bars them from agreeing to refrain from poaching each other's employees.

In a separate court filing on Tuesday, eBay asked a US judge to dismiss the government's lawsuits, saying the company had done nothing wrong.

Antitrust law "does not exist to micromanage the interaction between the officers and directors of a public company," eBay said in its filing. A Justice Department spokesman could not immediately be reached.

Koh is currently mulling whether the civil lawsuit can proceed as a class action, which would give the plaintiffs more leverage to extract a large settlement. Plaintiff attorneys have estimated that damages potentially could run into hundreds of millions of dollars.

"Schmidt responded that he preferred it be shared 'verbally, since I don't want to create a paper trail over which we can be sued later?'" he said, according to the court filing. The HR director agreed.

Schmidt is scheduled to be questioned by plaintiff lawyers next month.

The civil case in U.S. District Court, Northern District of California is In Re: High-Tech Employee Antitrust Litigation, 11-cv-2509.