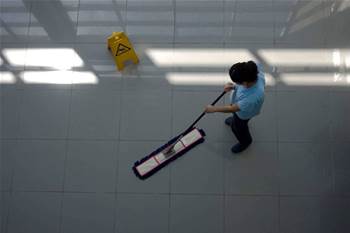 Information services relationship manager John Avgenicos told the recent Field Service Management 2015 conference the company had so far deployed over 1000 devices and had a target to roll out over 3000 devices.

The devices - a mix of smartphones, phablets and mini-tablets that run iOS or Android - are being given to technicians, technical supervisors and auditors on staff, and in some cases to contractors.

All the devices run MyWork - a custom app which enables Spotless to supervise employees and contractors that attend customer sites to perform work such as cleaning, grounds maintenance, laundry and facilities management.

MyWork is hosted on Microsoft Azure and was co-developed with partner Kloud.

The app is able to operate in a "partially disconnected" state - it can run offline when workers are not near communications infrastructure, such as when they are performing facilities management at remote mining camps in Western Australia's Pilbara region.

"We have quite a large range of users who are working in remote locations," Avgenicos said.

"We also have a lot of people who are working in plant rooms and in places where there's poor network coverage, so having a solution that purely relied on a web browser was not going to be workable for our use case."

Spotless also considered it important to deploy a system that could be used by in-house staff and contractors alike to enable it to document its compliance with different contract constructs.

"We have a variety of delivery models on our various contracts ranging from fully in house staff to fully subcontracted models and everything in-between," Avgenicos said.

"One of the factors from our perspective of the success of the mobility solution is how well we can adapt to different contract requirements."

According to Avgenicos, the traditional paper-based model for a large customer site meant "the supervisor gets a bunch of jobs and a pile of paper, and they farm the jobs out to people and the jobs come back [completed]".

This led to inefficiencies in the use of available support staff caused by a "lack of visibility and effective oversight", according to Kloud.

Now, with MyWork field workers can "view, sort and manage the work that's ahead of them; understand what's due next to be completed; manage and enter labour, materials and stock usage, and; describe the activity they've just been performing".

Meanwhile, knowing where field resources are means supervisors can reassign a job to someone whilst they're in the field.

"They can see where a job is at and where other jobs are around the area that person's going to work," Avgenicos said.

That enhanced visibility means urgent work orders - such as for reactive maintenance - can be prioritised to tradespeople who might already be nearby.

"We've found pretty much in general that the field techs actually like the larger sized devices - either a phablet size or a iPad mini-style size device up to a tablet sized device," Avgenicos said.

The company also trialled some ruggedised devices in the first 1000, with mixed success.

"We deployed a large number of semi-rugged devices and found they broke just as often as the non-ruggedised devices," Avgenicos said.

"You have to pray a little bit because you never know what the actual profile of the device use is going to result in."

One case for ruggedised devices was for workers in the Pilbara.

"What we found most predominately was heat was an issue with devices, and in particular with the iOS devices," Avgenicos said.

"Once the temperature got over about 35 degrees, the devices started having a bit of problem. When you're working up in the Pilbara on a site that's 300km from anywhere, it's no good if the device just dies and the technician can't find out his or her work - they've no longer got a job ticket on paper to rely on."

Avgenicos said Spotless had so far found 1GB of mobile data quota a month to be enough for most field force users, but noted there were excess usage protections that could be negotiated through a telecommunications partner.

"One of the things you can do with your telco is look at data averaging," he said.

"What you can do is negotiate with your telco to data average across all of those devices so you only pay when your total use goes over the number of users times that limit."