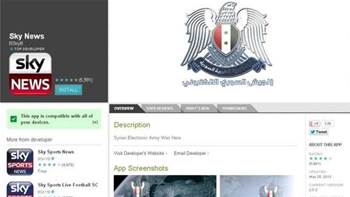 The Syrian Electronic Army cyber activist group appears to have illicitly gained access to Google Android applications for British Sky Broadcasting, defacing them and adding their own graphics.

UPDATE: All Sky's Android apps were hacked and replaced... please uninstall it, And we will let you know when it will be available

The compromise was first reported by British news channel ITV.

Former Reuters social media editor Matthew Keys writes on his site that the attack was confimed to him by an unnamed SEA "hacker". Keys also says several other Sky apps were targeted.

A screen capture provided to Keys by the SEA purportedly shows the Google Play developer console for the Sky/BSkyB Android applications.

Keys is currently facing three charges of aiding the Anonymous hacker collective to gain access to the LA Times but is contesting the charges with the help of his union.

As of writing, the compromised apps have been removed from Google's Play market place.

The Syrian Electronic Army is a throught to be aligned with the civil war-riven country's dictator, Bashar al-Assad. It has targeted Western news media over the past few months, compromising the social media accounts of The Guardian and others, as well as those of ITV this weekend