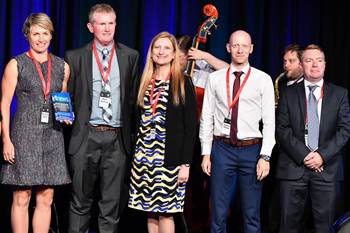 The winning team. LtR: Krissie Auld from the NSW Planning, Ron Avery from the NSW Office of Environment and Heritage, and Elizabeth Vega and Michael Power from partner Informed Solutions, and Daryn Vanstone from category sponsor Civica.

The NSW Department of Planning and Environment has won the state and local government award in the iTnews Benchmark Awards for consolidating and opening up environmental data to the public.

Its sharing and enabling environmental data (SEED) platform is a public-facing portal that centralises more than 1200 scientific datasets on land, air and water from nine state agencies and bodies.

SEED was borne from community consultation that found people wanted to be able to form their own opinions about environmental conditions and impacts.

Opening up this data to the public meant the platform had to be easy to use, but the department was unable to find appropriate technology on the market.

So it built the platform itself; SEED is made up of seven proprietary and open source technologies, with a deceptively simple frontend that means anyone can access, analyse and visualise environmental data, without requiring a scientific background.

Its initial success will see the platform's data holdings expanded to include further types and sets such as from the resources industry and research bodies.

"This is a really exciting award for us. It's a very good example of what can happen when government agencies work together on a whole-of-government portal - along with public and private agencies and our partners - but also what happens when you co-design with community, industry and government all in the same room together, and it's certainly inspired our team to take SEED forward to its vision," NSW Department of Planning and Environment's Krissie Auld said.

You can read more about the NSW Department of Planning and Environment's work alongside the other winning projects in the iTnews Benchmark Awards 2018 special edition report.