Schmidt to step aside as Google CEO 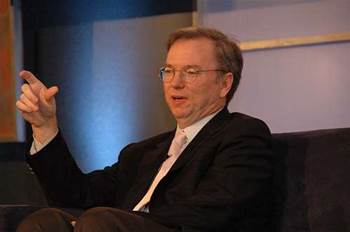 Founder Larry Page back in the drivers seat.

Google chief executive Eric Schmidt has announced that he will step down from his position as chief executive of the company on April 4, handing the reins back to founder Larry Page.

Schmidt, who joined the company in 2001, will remain with the company as executive chairman.

In a blog posting early this morning, Schmidt said the position will give him an "external" focus on "the deals, partnerships, customers and broader business relationships, government outreach and technology thought leadership that are increasingly important given Google’s global reach".

Google founder Larry Page, as CEO, will take over product development and day-to-day operations of the company, whilst his co-founder Sergey Brin will continue to focus on strategic projects.

Schmidt said that managing Google had become a more complex job as the company diversified.

"Larry, Sergey and I have been talking for a long time about how best to simplify our management structure and speed up decision making," he said.

"For the last 10 years, we have all been equally involved in making decisions. This triumvirate approach has real benefits in terms of shared wisdom, and we will continue to discuss the big decisions among the three of us. But we have also agreed to clarify our individual roles so there’s clear responsibility and accountability at the top of the company."

Schmidt, formerly CEO of Novell and CTO at Sun Microsystems, had quit his position on the board of Apple in 2009 due to a growing conflict of interest with his role at Google.

Schmidt said he would continue to act as an advisor to Page and Brin.