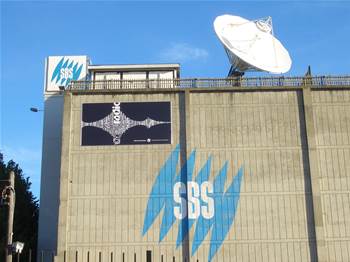 Australia’s Special Broadcasting Service (SBS) will outsource the playout operations for two of its channels and shift 58 of its employees to cloud-based content delivery firm Deluxe Australia before Christmas.

The broadcaster today announced it had signed a deal with Deluxe Australia to provide playout operations services for SBS One and SBS 2 from January 27 next year. 'Playout' refers to the transmission of radio or TV channels from the broadcaster into a format able to be delivered to an audience.

SBS has spent the past 10 months looking at how to evolve beyond its current infrastructure - a mix of traditional broadcast infrastructure from various vendors which is nearing end of life - and cut down on operational costs.

Outsourcing the One and 2 channels to Deluxe’s MediaCloud offering means SBS will keep pace with global trends as well as a “major shift we are seeing in the industry internationally to managed serviced arrangements”, SBS technology and distribution director Noel Leslie said in a statement

“The use of a cloud-based platform will give us greater flexibility, resilience and agility around our playout service while still continuing our core functions in the broadcasting chain.”

The 58 employees in SBS’ broadcast playout team will be offered jobs at Deluxe on ‘substantially similar terms’ to their current contracts, and will be relocated from the SBS Artarmon head office to new custom-built offices in Lane Cove, where the MediaCloud offering will be based.

The Lane Cove facility will also act as Deluxe’s regional broadcast hub once it is complete.

SBS has an existing contract with MediaHub for playout of its NITV, World Movies and Studio channels, which it signed in 2012.

The Government's 2014 ABC and SBS efficiency study, a redacted version of which was released today, reported that the outsourcing of additional playout functions would achieve the kind of ongoing operating expense savings the organisations need to find.

The precise dollar and percentage savings expected from the move were redacted from the report, but it did reveal that the ABC had achieved savings of 16.5 percent by moving its own playout operations to MediaHub.

Content delivery provider Deluxe counts 450 Australian and 5500 global staff on its books, and runs its head office out of New York. It boasts Endemol and the Nine Network as clients among a number of film and production companies.

SBS declined to provide the value or length of the Deluxe contract.